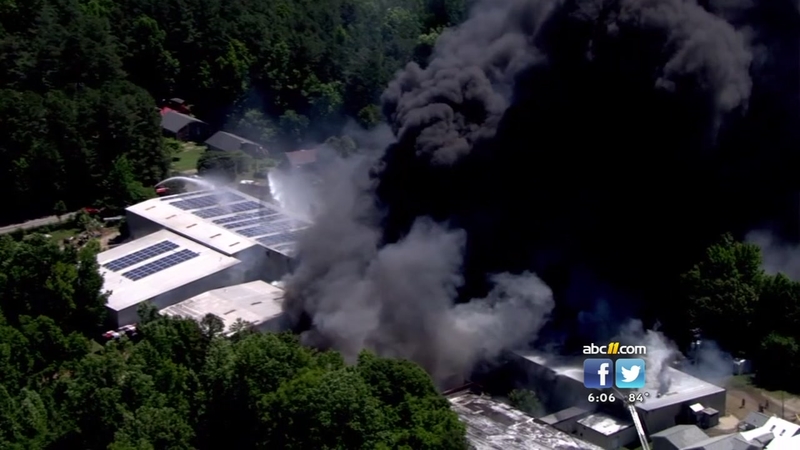 It broke out around 10 a.m. Monday. About 50 firefighters were on scene.

Thick black smoke and flames were pouring from the center of the manufacturing complex located in the 600 block of Wakefield Avenue in Henderson.

On Monday afternoon, the fire continued to smolder.

Thick black smoke and flames poured from the building.

"Right now the crews are doing a great job," the Henderson fire chief said. The main concern was battling the heat.

Mayor Eddie Ellington said all the employees were able to make it out safely, but four firefighters have been treated for smoke inhalation, one was taken to the hospital, but is expected to be OK.

Residents in surrounding homes have been evacuated because of the smoke.

A Walmart is serving as a temporary shelter for those who had to leave their homes.

Up close look at fire...I'm told resident around here have been evacuated because of smoke #ABC11 pic.twitter.com/tjGtnTnOQ7

Fire crewing from several departments are on the scene.

According to its website, ETC makes products for the janitorial and food service industries.

Backyards are full of Ash from factory fire #abc11 pic.twitter.com/rAzy3yhCSV

Mayor Ellington said this is the second fire at the site. Another one destroyed the plant 13 years ago and the owner rebuilt.

The Henderson fire chief said it's too early to determine how the fire got started.