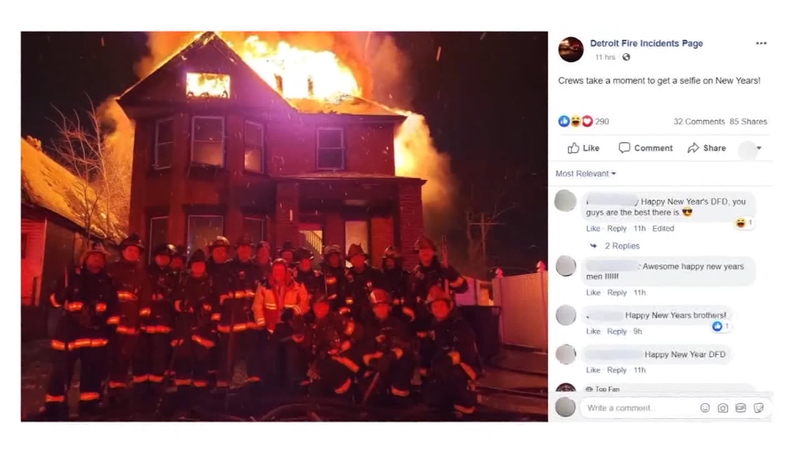 The image shows The Detroit Fire Department's Battalion 7 firefighters standing in front of a house with flames bursting from the roof in the city's Del Ray neighborhood.

The manager for the Facebook page that posted the photo told the local ABC affiliate WXYZ-TV that it was meant to be a farewell tribute for a retiring chief.

"Crews take a moment to get a selfie on New Years," the page wrote as the caption.

On social media, some approved the image, one commenting: "I think it's the coolest thing I've seen in a while. Let it cook down to the basement."

"Let it burn. They are actually cleaning up the city this way," another wrote.

Others are questioning the firefighters' professionalism.

"This puts a really bad rep on your company to the community," one Facebook user said.

Another said they hoped the fire was staged.

"I'd hate to think my firemen were posing for pictures while a real house was burning," the person wrote.

The Detroit Fire Department said the home was vacant and conditions forced a defensive position, not allowing crews to go inside to knock the fire down.

However, in a statement, Detroit Fire Commissioner Eric Jones announced an investigation.

"There are a lot of ways to celebrate a retirement. Taking a photo in front of a building fire is not one of them. We will investigate this matter and follow the facts where they lead us. If this photo is verified, discipline will be in order," the statement read.

Some neighbors of the home said firefighters doused the adjacent abandoned house with water and contained the fire.

One resident, who did not want to be named, told WXYZ-TV she wasn't concerned over the photo.

"As long as the fire was put out, and as long as it didn't spread to any other houses in the neighborhood, that was fine," she said. "I mean, I appreciate their promptness in getting there and putting the fire out. That's all I was concerned about."
Report a correction or typo
Related topics:
michiganfacebooku.s. & worldphotofirefightersinvestigation
Copyright © 2021 WTVD-TV. All Rights Reserved.
TOP STORIES
Body matching description of Gabby Petito found in Grand Teton: FBI
TIMELINE: What happened to Gabby Petito?
2 men die after shooting on NCCU's campus during football game
Wake County groups fight vaccine hesitancy
Durham firefighter dies after month-long battle with COVID-19
NC respiratory therapist describes 'heartbreaking' job
Show More
Man shot in neck at Rocky Mount convenience store
US closes part of Texas border, begins flying Haitians home
Man charged with murder in connection to Raleigh assault
Powerball drawing yields no winner; lottery jackpot at $472M
'919 Day' celebrates all things Raleigh with Moore Square festival
More TOP STORIES News