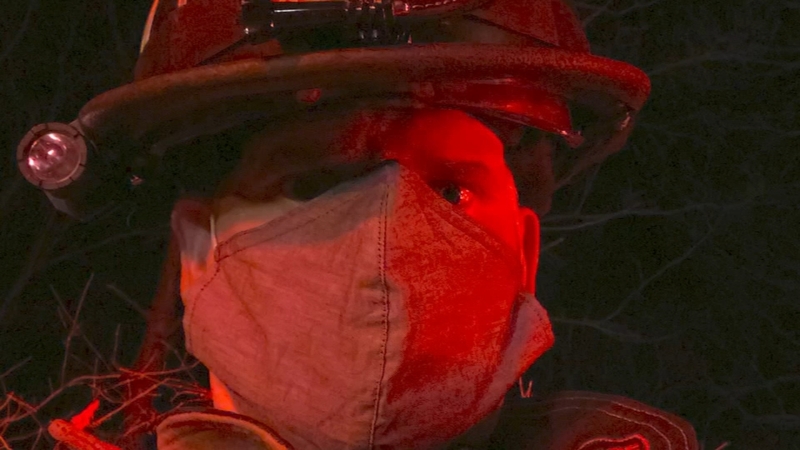 RESEARCH TRIANGLE PARK, N.C. (WTVD) -- In the public safety world, they are known as LODDs -- line of duty deaths.

And now the biggest cause of those deaths in public safety jobs isn't from rushing into burning buildings or getting shot, it is from COVID-19.

That's why researchers in the Triangle have developed a way to track coronavirus infections in the public safety group most likely to get them -- firefighters and emergency medical technicians.

And it's important to remember that while working, many of them live, eat, and sleep dormitory-style.

"You take people who have an increased number of exposures to at-risk individuals and members of the public through their occupational sort of goings-on, and then you put them in close proximity indoors to one another for extended periods of time," Robert Furberg told ABC11.

Furberg, a medical researcher for the Research Triangle Institute in Durham said if not a recipe for disaster, it's at least a recipe for spreading SARS-CoV-2.

Before joining RTI, Furberg was a professional firefighter and paramedic, and he still volunteers with a fire department in Orange County.

So he was speaking from the heart when he said, "COVID is the leading cause of line-of-duty deaths in firefighters in the United States. So, the issue is real and it has a lot to do with the nature of the work."

Because of his background, Furberg was the obvious choice to help collect data for a dashboard created by Adam Blythe at the Office of the State Fire Marshal.

The dashboard allows state officials to track COVID-19 infections in firefighters and emergency medical technicians as the state struggled with the issue.

"The impact of COVID on fire departments in North Carolina was really poorly understood," Furberg said.

But now, North Carolina is the first state where government agencies overseeing firefighters and EMT's, the state Department of Insurance and the state Fire Marshall, can not only track but map their infections.

The tracking dashboard may also be of benefit to survivors of any firefighter or EMT to die in the line of duty from COVID-19, according to Furberg.

"One of our goals is to make sure that that line-of-duty deaths are attributed to workplace exposures in order to ensure the family members of that firefighter receive the benefits that they're due," he said.

Furberg said the effort was spurred in part by the COVID-19 outbreak in the Clayton Fire Department back in August.

It killed the deputy chief and even spread outside the firehouse.

Despite that, Furberg said firefighters are among the public-safety workers most hesitant of vaccines.