I-Team investigates: If it flooded before, then it flooded again - why restore that property? 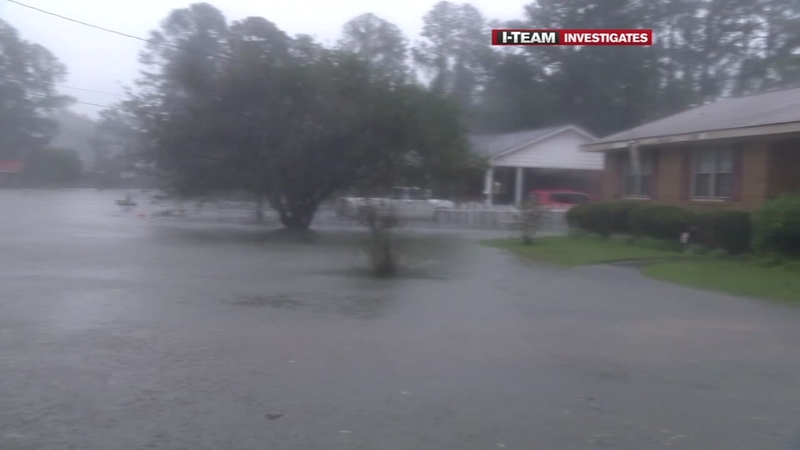 I-Team: If it flooded before, then it flooded again - why restore that property?

RALEIGH, N.C. (WTVD) -- There's a fine line between having the government make rules about where someone should or shouldn't live, and citizens having the freedom to buy or rent a home and live wherever they want.

For many North Carolinians, Hurricane Florence was Round 2 after Hurricane Matthew in 2016. According to state budget officials, the combined cost of damage from the two storms is more than $22 billion.

With billions of dollars pouring in from insurance claims and government aid packages, the ABC11 I-Team conducted a wide-ranging investigation of damage reports, flood maps and zoning ordinances to find out why property owners are allowed to continue to invest in repeat-disaster zones.

Though the question is simple in its premise, the I-Team found it to be tough for both local and state officials to answer.

"Mother Nature has qualms with this place"

After Hurricane Matthew, Victor Irra decided to move uphill from Creeks Edge Townhomes on Aftonshire Drive in Fayetteville. The neighborhood has several dozen units sitting nearby Beaver Creek, which on a quiet day barely makes a splash.

"Hurricane Matthew, when you came down here, you saw sofas, love chairs, TVs floating down here," Irra recalls. "It was hectic to say the least. People didn't expect the rainwater to get to the level it was."

Despite relocating to another neighborhood, Irra started working as a contractor to restore the damaged homes in Creeks Edge, including installing drywall. Then Hurricane Florence hit.

"Mother Nature has qualms with this place," Irra told ABC11. "In my own personal experience, I wouldn't live here. If I someone I knew wanted to live here, I would give them my advice and information I know and if they still want to live here, more power to them. You would think something like this, something major as Matthew would tell the higher-ups, the people who control money and budgets and whatnot, maybe there's something wrong down here. Is it viable to save this neighborhood? It is worth saving this neighborhood? It all depends on who you ask."

According to North Carolina's flood maps, Creeks Edge sits in a floodplain, an area that has a 1 percent risk of flooding in any given year.

The maps, however, are not enforceable laws. Instead, state officials maintain they are a citizen's best resource for risk assessment. Since 1999, North Carolina has invested more than $100 million into its flood mapping technology, including the creation of the online Flood Risk Information System (FRIS), a free, interactive website featuring high-resolution ground studies, flood hazard forecasts, models, maps and flood insurance costs.

Another online tool, the Flood Inundation Mapping and Alert Network (FIMAN) is a real-time gauge on all waterways across the state.

"Since 1999, we have now studied over 29,000 stream miles and coastal miles, so that people along those rivers and streams along the coastline understand what their real risk is," Dorman told ABC11. "Now, I cannot require them to buy flood insurance, but, I can certainly show them what their hazard and risk really is."

FRIS, considered a national leader and exemplary for other flood-prone states, has information on more than 5.2 million structures across the state.

"We tie the value of the property, we tie what is the first-floor elevation, where you walk into your livable space," Dorman adds. "The homeowner is really the individual that is the first point of making those decisions, and so it's our intent, our desire to show them enough information that is the catalyst to getting them to make more resilient decisions, either in what house they buy or how they mitigate their property to become more resilient."

Dorman, whose department is part of North Carolina's Emergency Management and Department of Public Safety, maintains that and investment in flood insurance will always be a fraction of the cost of rebuilding without it.

"In North Carolina, of all the properties that are in the 100-year flood plain, only 30 percent of them have flood insurance. My desire would be that they would use these maps and see that it is much cheaper to buy flood insurance than to have to deal with months and years of trying to get yourself back up to where you were before an event occurred. Many of the folks that were impacted by Matthew and Florence that had national flood insurance coverage have already rebuilt. They've already gotten all their money. Their lives are moving back to where they need to be. As opposed to those who didn't, many of them have not rebuilt at this point in time."

Flood insurance is managed by and offered through the federal government, but the National Flood Insurance Program empowers states and communities to implement their own policies to manage potential flooding - as long as the regulations are not "so restrictive they effectively take people's freedom to use their properties."

A local government cannot simply tell people they can't build in floodplains because it could prove unconstitutional; the Fifth Amendment prohibits the taking of any property "without just compensation."

Governments do possess the authority to acquire privately owned land through eminent domain, but that's only for public works projects, development of public park land or utility acquisitions of rights of way for transmission lines.

Gerald Newton, Development Services Director for the City of Fayetteville, told the I-Team it's also an uphill battle to amend zoning ordinances where building has already taken place.

"To change that requires the legislature, requires Congress, it changes the overall regulations of environmental impact of man building on natural designs," Newton explained to ABC11.

The City of Fayetteville, however, can implement added regulations on developers when it comes to improved stormwater drainage. Newton says it's also imperative for developers, real estate agents and residents to research the flood risk to a property, and he points to FRIS in saying that information is readily available.