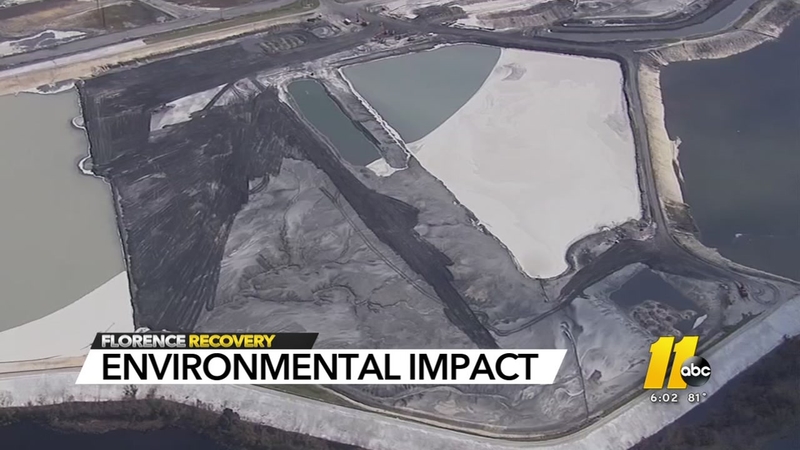 WILMINGTON, N.C. (WTVD) -- There are fresh warnings on Friday that the historic flooding from Hurricane Florence may be leading to an environmental emergency.

One week after the storm made landfall on North Carolina, Duke Energy confirmed a dam breach near its Wilmington power plant, spilling an immeasurable amount of coal ash into the Cape Fear River. Environmentalists worry that coal ash-waste from burning coal -- contains dangerous heavy metals such as arsenic, lead and mercury.

"If I told you I dumped a whole bunch of arsenic and heavy metals in a swimming pool, would you want to jump in?" said Matthew Starr, Upper Neuse River Keeper for Sound Rivers. "That's the same thing that's happening with coal ash ponds stored on the banks of our rivers."

Friday's incident is separate from the rupture at a nearby coal ash landfill reported at the site last weekend, spilling enough material to fill 180 dump trucks. The site received more than 30 inches of rain from former Hurricane Florence.

"If these rivers were people, they have been beaten, bloodied and they'd be in the hospital," Starr added.

Adding to the pollution threat, the Department of Environmental Quality said the earthen dam at one hog lagoon in Duplin County had breached, spilling its contents. Another 25 of the pits containing animal feces and urine have either suffered structural damage, had wastewater levels go over their tops from heavy rains or had been swamped by floodwaters. Large mounds of manure are also typically stored at poultry farms.

The threat of environmental disaster may go beyond pollutants, however, as state officials and farm advocates release new information on crops lost in the devastation.

"Plants need water, but not this kind of water," Peter Daniel, with the North Carolina Farm Bureau Federation, explained to ABC11. "It's not just hogs and chickens; It's tobacco, it's corn, it's soybeans, it's cotton. It's in the millions and millions and millions of dollars' losses."

Sanderson Farms, a major poultry producer in the state, said it lost about 1.7 million chickens after flooding at more than 60 of the independent farms that supply its poultry processing plants. The company said its facilities suffered no significant damage, but supply disruptions and flooded roadways had caused shutdowns at some plants.

In addition, about 30 farms near Lumberton have been isolated by floodwaters, hampering the delivery of feed to animals. The lack of food could cause additional birds to die if access isn't restored quickly, the company said.

Smithfield Foods, the world's largest pork producer, said its plants also suffered no significant damage and are operating at limited capacity. The company said it would ramp up production as roads become passable.

An environmental threat is also posed by human waste as low-lying municipal sewage plants flood. On Sunday, the Cape Fear Public Utility Authority reported that more than 5 million gallons of partially treated sewage had spilled into the Cape Fear River after power failed at its treatment plant.