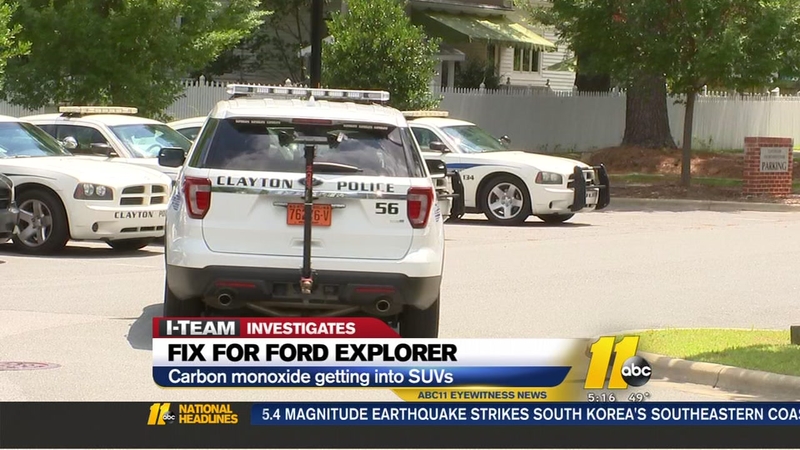 RALEIGH (WTVD) -- Beginning this week, the owners of Ford Explorers made between 2011 and 2017 will start getting letters from the company alerting them to a potential problem with the popular SUV's exhaust system; specifically, the fact that it could possibly leak into the driver's cab.

Last month, Ford put out the following statement on the issue: "Ford is aware that some 2011-17 Explorer owners have concerns about exhaust of carbon monoxide. These vehicles are safe. Our investigation has not found carbon monoxide levels that exceed what people are exposed to every day. However, for our customers' peace of mind, Ford is offering a complimentary service that reduces the potential for exhaust to enter the vehicle. Customers can take their vehicles, regardless of mileage or warranty status, to a Ford dealer to have this service performed, starting Nov. 1, 2017 through Dec. 31, 2018. To be clear, other carbon monoxide concerns in Police Interceptor Utilities are related to unsealed holes from the installation of police equipment by third parties after the vehicle was purchased. This action involves approximately 1.3 million vehicles in the United States, 84,000 in Canada and 24,000 in Mexico. The Ford reference number for this service is 17N03. To reduce the potential for exhaust to enter the vehicle, dealers will reprogram the air conditioner, replace the liftgate drain valves and inspect sealing of the rear of the vehicle at no cost to the customer. Customers with questions also can call a dedicated hotline at 888.260.5575."

But police departments throughout the Triangle with Explorers in their fleets are taking steps to either test for potential CO leaks or return their Explorers to Ford for the repairs the company is now offering the public.

Raleigh, Chapel Hill, and Wake Forest police all report cycling SUVs back to Ford for retrofits. Other departments say they've equipped their Explorers with CO monitors to alert officers if levels become dangerous.