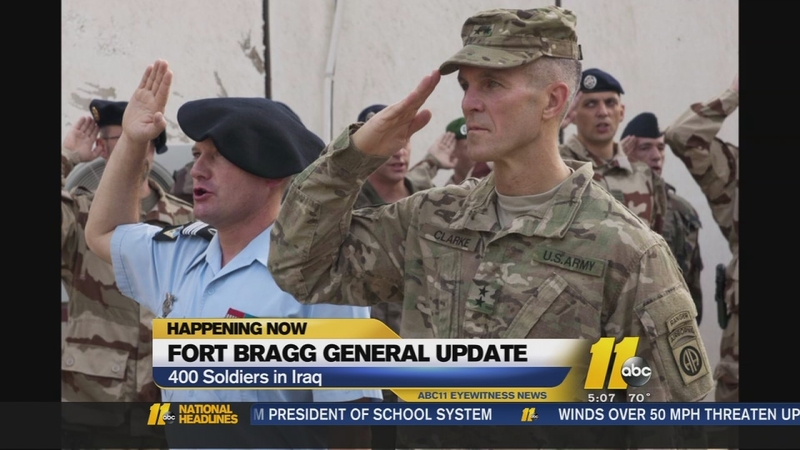 FORT BRAGG, NC (WTVD) -- With an 8 hour difference between his troops at Fort Bragg and those alongside him in Baghdad, Major General Richard Clarke took a break after dinner to speak with Fayetteville-based reporters via telephone Thursday afternoon.

The 82nd Airborne Division commander is proud of the accomplishments local troops are making through Operation Inherent Resolve. They advise and assist Iraqi Security forces in their quest to reclaim territory from Islamic militants. In Baghdad, Clarke overseas operations for the Joint Forces Land Command Iraq, which currently includes 400 troops from the Division.

"This place, Iraq, has a lot of blood and treasure from the 82nd lost here," Clarke said. "We want to see this country succeed."

Clarke is confident Iraqi forces have what it takes to defeat Daesh, the newly adopted name for the terrorist group ISIL. It's the Arabic acronym translation for the group, and many world leaders use the moniker to delegitimize the militants.

"Daesh has not gained any ground in Iraq since May 19th," Clarke told reporters.

He credits that loss of power to the effective field training U.S. troops are providing Iraqi Security Forces in the forms of training, equipping, and assisting with air and artillery strikes.

"Daesh would attack them (Iraqi Forces) and they would, they would flee," Clarke said, remembering the start of the mission. "They'd leave the battlefield. They were a defeated Army. But now through confidence and training, confidence in their equipment they've been given primarily through U.S. funding, they've gained confidence back."

Many of the local soldiers have been deployed to Iraq on multiple occasions. Clarke said the biggest training challenge involves teaching Iraqi forces how to navigate IED placement he likened to the minefields of World War I and World War II. Today, ISIS fights like an army.

"I've never seen an enemy like Daesh before," Clarke said. "An enemy that's willing to throw people off buildings, cut off hands, cut off heads because of someone's beliefs - and that makes it even more personal.

Clarke said defeating ISIL is possible without the help of U.S. combat troops.

"We're doing this 100 percent with the Iraqi security forces in the lead, and they're capable of doing this," Clarke said. "The challenge is patience, and knowing this is fighting with someone else's fist."
With most of the Division on the home front, Clarke said things have not slowed down from them. Training missions are taking the soldiers across the world to places like Germany, Spain, England, Holland and parts of Africa.

"As the Global Response Force, it can't stop," he said, thanking the paratroopers back home.

The 82nd troops are expected to return home from their 9-month Iraq deployment in March. They'll transfer authority to the 101st Airborne Division out of Fort Campbell.