Department of Army in Fayetteville hears impact of planned cuts 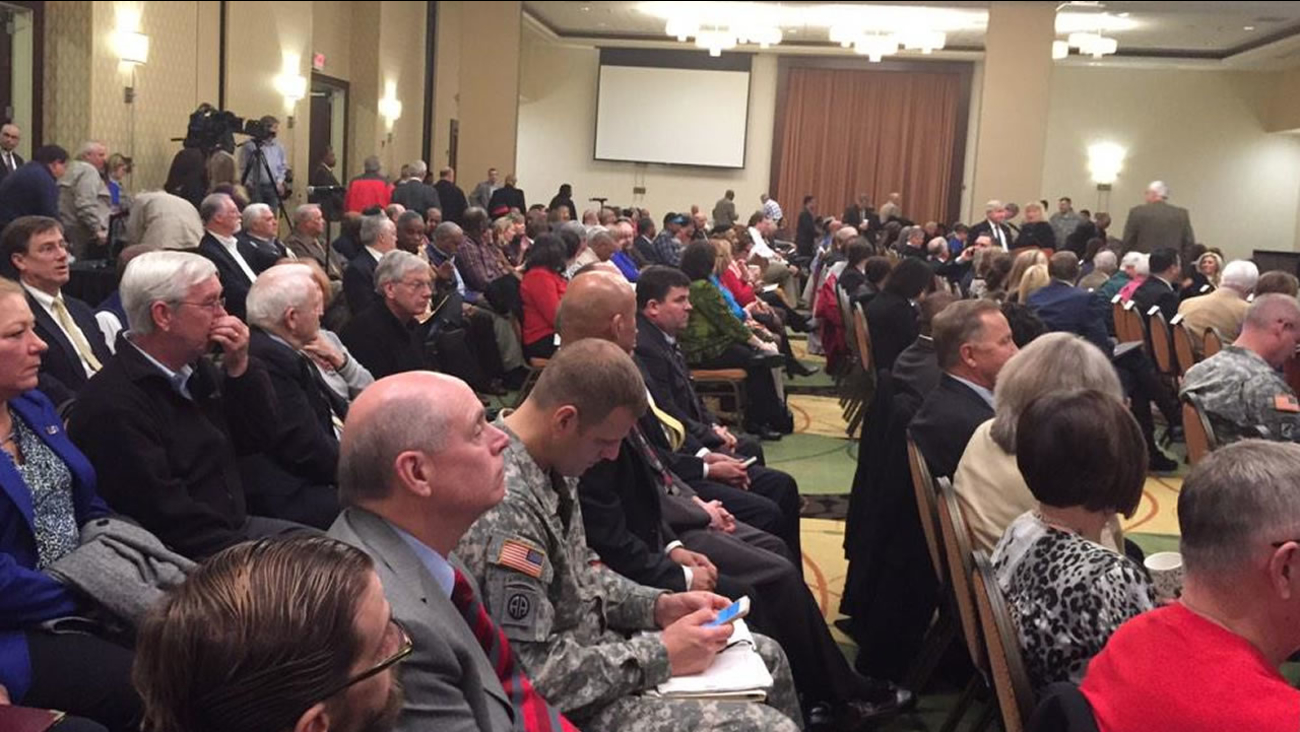 About 450 people were part of the Fort Bragg listening session being held at the Embassy Suites hotel in Fayetteville.

FAYETTEVILLE, N.C. (WTVD) -- Hundreds of military and civilian leaders and Sandhills residents were in Fayetteville Thursday to tell the U.S. Army why it should spare Fort Bragg in planned defense cuts.

"This is your opportunity to tell the Army why it is in their best interest not to cut the number of soldiers stationed at Fort Bragg," Fort Bragg commander Lieutenant General Joseph Anderson told the crowd.

About 450 people were part of the Fort Bragg listening session being held at the Embassy Suites hotel in Fayetteville. Thirty sessions are being held across the country, and the input received at each session will help the Army decide where to make personnel cuts. The Army is also following social media feedback with the hashtag, #BraggPEA.

Due to sequestration, the Army plans to eliminate 125,000 soldiers across the active-duty force, Reserves, and National Guard. An additional 26,000 civilian government employees may also be cut.

Fort Bragg boasts an estimated $9.8 billion annual impact on the local economy. It's home to Special Operations forces, 54,000 soldiers, and more than 100,000 families members. It could see a loss of about 16,000 positions.

Anderson noted the pace of Fort Bragg duties have not slowed, with troops currently deployed to 18 countries, including Iraq, Afghanistan, and Liberia.

"The pace of life at Fort Bragg is crazy," Anderson said. "The issue becomes, as you heard in here earlier-readiness. So the last thing I want to do as commander is not be able to them out the door as best prepared, equipped, trained, manned as we possibly can."

A final decision about where to eliminate the positions is expected to be announced by the end of June. The decision will be based on a number of factors - including training consequences, quality of life, quality of education, proximity to ports (for deployments), and road infrastructure.

"General Odierno and the Secretary (of the Army) understand that this is not about numbers," said Brig. Gen. Roger Cloutier, who represented the Army in the session. "This is about soldiers and lives, hopes and dreams....so it's incredibly complex. They're going to make the best decision they can."

Thursday's listening session was full of passionate speakers advocating for Fort Bragg, the Sandhills communities, and their fiscal health.

"We understand the need to balance the nation's checkbook, but not at the cost of the nation's security," said Spring Lake Mayor Chris Rey, whose comment was met with loud applause.

"You all know when the Commander-in-Chief dials 911, that phone is answered here at Fort Bragg," said Fayetteville mayor Nat Robertson.

Robertson ran down a list of why Fayetteville needs and supports the military community. He talked about the recent USAA ranking topping Fayetteville as one of the best military communities in the country, the investment in Veterans Park and the Airborne and Special Operations museum and the country's only Army-sponsored running event, the All-American Marathon and Mike-to-Mike Half Marathon.

"We've got your back," Robertson echoed.

"[Fort Bragg is] that much more precious to all of us and we don't want to that diminish," said Taylor.

State leaders noted more than $1 billion invested in road infrastructure around Fort Bragg since 2006. Additional funding was recently allocated to complete the I-295 corridor, ensuring Fort Bragg isn't the only large military installation that is not connected to a major interstate.

Cumberland County Schools superintendent Dr. Frank Till told the crowd that 30 percent of the student body is military-connected, including a third grade boy he is currently mentoring whose father is deployed.

"The only thing his father will notice when he comes back is if he wears a tie, because someone taught him how to tie a tie," said Till, emphasizing the importance of embracing and empathizing with military families.

Cloutier said all of the ongoing social media comments and listening session data will be taken into serious consideration as the Army prepares its budget recommendations. Sandhills leaders hope their passion will make the case for Fayetteville.

"I will says that the DOD should consider increasing Fort Bragg by 16,000 or more service members," Rey told Army leaders. "We have everything necessary to not only train our soldier, but create a great environment for them to learn, live and play. That's who we are."