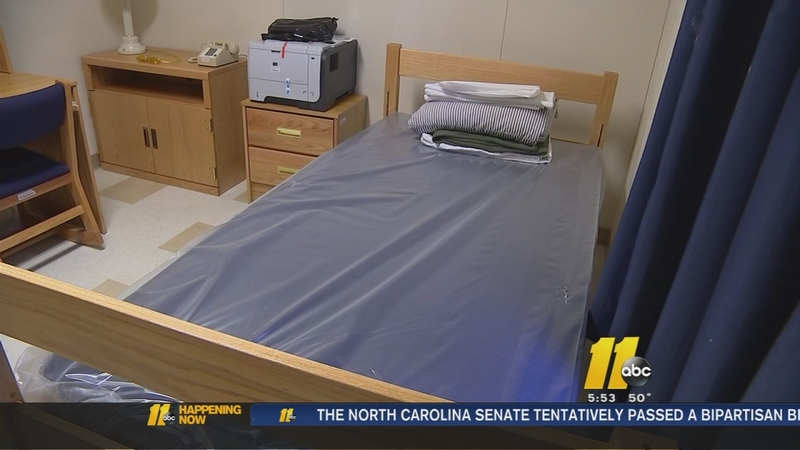 FORT BRAGG, N.C. (WTVD) -- X-Box, PlayStation, books on tape, workout equipment, and an Internet Cafe... You name it, and the troops who will be sent to Fort Bragg from Liberia have it.

"I think we're giving them a pretty good quality of life," said Col. Michael Smith, commander of the 28th Combat Support Hospital. "It meets 18th Airborne Corps standards, and that's the highest in the Army."

On Wednesday, Smith and members of the 44th Medical Brigade gave local media a tour of the nine building village that will serve as an Ebola monitoring headquarters for U.S. troops returning from West Africa. Most of those troops are stationed at other installations.

Just before Thanksgiving, the Department of Defense named Fort Bragg one of five military installations to serve as a monitoring or quarantine site for the roughly 2,000 U.S. troops, contractors and DOD civilians involved in the Ebola response. It also served as a training site for deploying personnel. The White House announced Tuesday that U.S. troops would withdraw from the region, amid a sharp decline in Ebola cases.

The sites house medics to monitor service members' health during a mandatory 21-day isolation period. Temperatures are taken twice a day, as well as vital signs, but Fort Bragg officials don't anticipate any Ebola-related illnesses to emerge from incoming troops.

"Everybody should keep in mind that these soldiers have not been in contact with any local nationals," said Col. Ken Shaw, Division Chief for Wellness and Readiness at Womack Army Hospital. "They should not have been exposed to the disease at all."

Shaw said other monitoring sites have only observed common illnesses, like traveler's diarrhea, and the flu, in returning soldiers. If any symptoms arise, troops will be taken from the controlled monitoring site to Womack for further testing, and quarantine, if necessary.

Fort Bragg won't know how many troops they will receive until they begin arriving next week, but the local site will remain open until all U.S. troops have returned from West Africa and completed the isolation period.

"We will keep this operational until mission complete," said Smith.

Fort Bragg's monitoring site consists of a nine building village behind a gate that troops will not go past until their three week period has expired.

It can house up to 100 personnel at once, and each soldier, airman, or sailor will have their own room in a three-member suite. They share a common living area and bathroom, much like a college dorm set-up.

"All the suites look identical now that's we've remodeled them to fit their specific need," said 1st Sgt. Jose Perez during the tour.

"They can play music and videos while they work out," said Perez.

An internet cafe is available for troops to Skype back home or to complete mandatory training work.

"We're going to keep them occupied, help them to relax and get 'em back home," said Smith.

But mail can be delivered to the troops, and AAFES will deliver online purchases right to the monitoring site gate. Religious services will also be available.

"We're kind of making them realize that it's not going to be too bad of a deal for 21 days," said Smith. "It's a requirement but we're going to make it enjoyable, make it pleasurable for them and keep them comfortable."