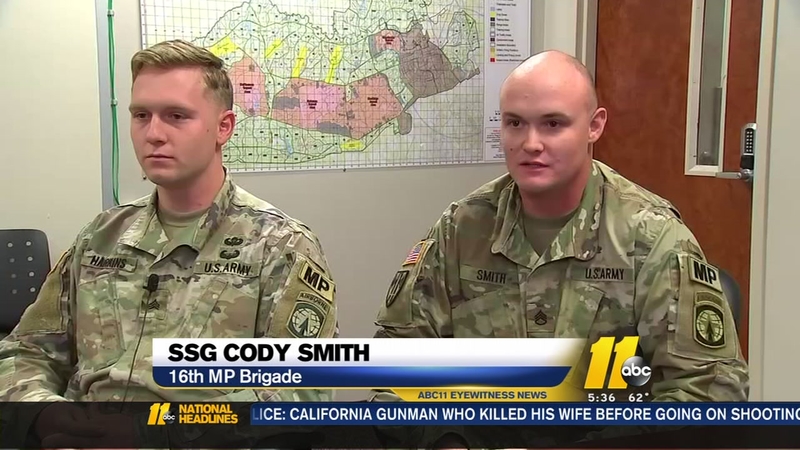 FORT BRAGG, North Carolina (WTVD) -- Two Fort Bragg Military Police officers are being hailed as heroes for their role in talking down a woman who threatened herself and officers.

Fort Bragg says they get distressed person calls at least three times a month and they all have the potential to end badly.

What started off as a routine patrol call quickly turned into a life-saving mission.

"He was danger close. Because of the proximity to someone with a weapon and not knowing their true intention," said Maj. Jeffrey Gassaway.

But more important than danger was duty.

"I tell myself nine times out of 10 we are going to be counselors on the road. Instead of being an MP. Being that aggressive force ... Just sitting down and talking to somebody," said Staff Sgt. Cody Smith.

That's exactly how Smith was able to resolve the tense situation. Crisis negotiators were on the scene Monday afternoon but it was Smith who did all of the negotiating.

"She liked puppies, Pepsi, and cars so that's what we focused on," Smith said.

Minutes into the conversation, Smith learned the woman had given up after losing several family members. Two hours later, he was able to get the weapon away.

"What he did was a selfless act and it was very brave driving on that loaded weapon. He did a fantastic job and it's just a perfect example of what soldiers do every day for other people," said Sgt. Chandler Harkins.

Harkins and Smith plan to educate other MPs on the importance of crisis communications.

ABC11 has decided to slowly reduce the number of stories on the website that have a comments section. We believe very strongly that our audience should have an opportunity to discuss and debate events in our world, however, we have not been able to moderate the comments as well as we would like. Instead of hosting a platform that could allow a few loud and ugly voices to dominate a conversation, we want to encourage everyone to join us on our social media platforms and speak out there. Facebook: facebook.com/ABC11 Twitter: twitter.com/ABC11_WTVD
Report a correction or typo
Related topics:
societyfort braggcumberland countysuicidemilitaryfort bragg news
Copyright © 2021 WTVD-TV. All Rights Reserved.
TOP STORIES
Streets of Southpoint reopens Saturday after shooting that injured 3
UK, Germany, Italy report cases of new omicron variant
3 killed, 1 arrested in Robeson County shooting
Fire destroys guitars at house of Avett Brothers' father
Rep. Lauren Boebert issues apology for anti-Muslim remarks
Ahmaud Arbery's mother speaks out after murder trial verdict
Show More
Small Business Saturday is a lifeline for Triangle shops
Girl paralyzed in porch swing accident now helping other injured kids
Mother reunited with family after more than 7 months in hospital
Christina Applegate shares message on 50th birthday after MS diagnosis
Holiday shipping deadlines to get packages mailed on time: LIST
More TOP STORIES News