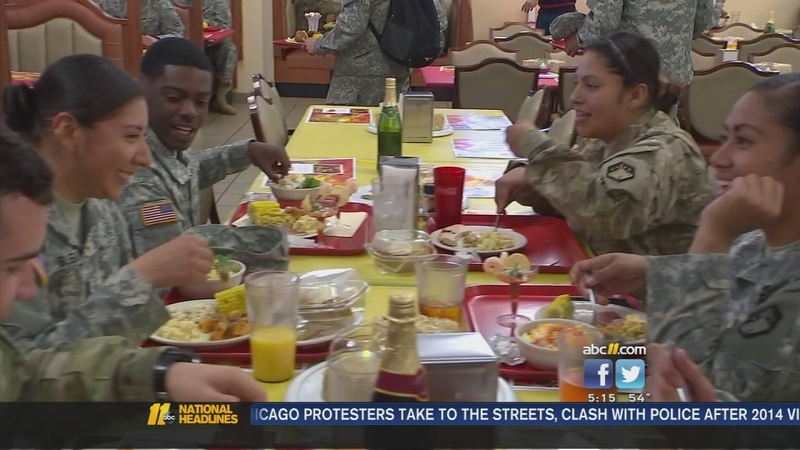 Thirty hands were on deck in the kitchen, and the troops were completing their Thanksgiving mission-feeding 500 soldiers and their family members.

"I'm not going to lie to you, it gets pretty rough sometimes," laughed Sergeant Brian McGilvary, who has been in food services for four of the past 17 years. "But I love doing it. I enjoy cooking for soldiers, seeing the smile on their faces."

ABC11 got a peek inside the dining facility for the 82nd Combat Aviation Brigade, just one place where pre-Thanksgiving Day feasts were prepared on post. This time last year, 700 troops from the brigade were deployed to Afghanistan, making this year at home even more special.

"When I was there, they tried to have a whole little Thanksgiving thing set up but it wasn't the same," said Specialist Kenneth Crittenden, who was standing in line for the feast." Not the same as being home.

.@FtBraggNC @82ndCAB feeding troops. 700 were in Afghanistan this time last yr, so this is a special Thanksgiving! pic.twitter.com/teRbOseOPn

During the entire holiday while he was deployed, Crittenden said he had one thought.

"It touches my heart because my brother's actually in Kuwait right now, so he won't be able to be home," added PV2 Ezzle Clemons, who was in charge of fixing the stuffing. "So it means a lot that they'll get to be home this year and we'll get to put out this great meal that they'll enjoy."

"This meal, of course I wasn't expecting all this," said PV2 Isabel Bueno. "It's really good."

"It's pretty special, especially since the NCOs and officers are feeding us," said Private First Class Ethan Bennett." It's great."