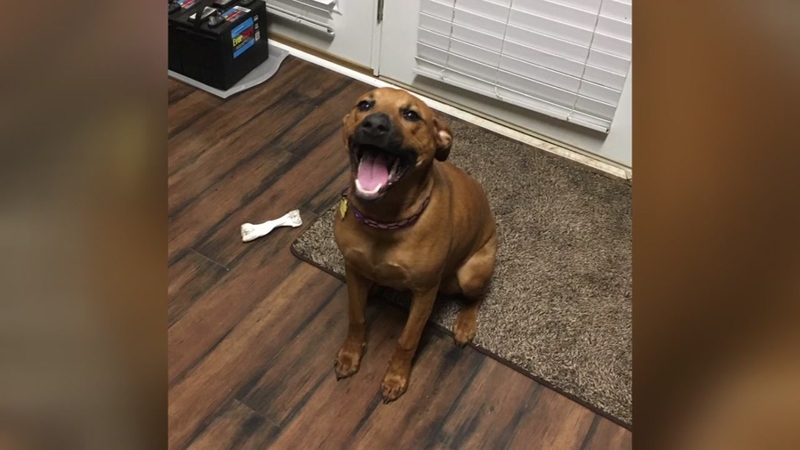 WAKE COUNTY, N.C. (WTVD) -- A Wake County woman is upset after her dog was struck and killed by a Franklin County school bus Thursday morning.

Victoria Dunstone was concerned when her puppy Lucy did not come back inside with her dog early Thursday morning. As she walked outside to the edge of her property, which does not have a fence, she found Lucy's body near a pool of blood on the side of the road.

Dunstone said she did not hear the crash, but the bus driver did not immediately reach out to her after the collision.

"That's what a real person does, is they come forward and they say I accidentally killed your puppy. And as that didn't happen, I got more and more frustrated," Dunstone said.

Friday morning, she confronted the driver during her morning route; Dunstone said the driver then contacted authorities to handle the matter.

Dunstone pointed to what she believes is a tire mark on the edge of her property that shows the bus driver swerved and hit Lucy. However, in a statement, the Franklin County School District said that Lucy ran into the street:

"Yesterday, bus 188 struck a dog that ran out into the road when it was completing its route. The driver pulled over and contacted the bus garage to make them aware of the incident. The dog's owner was not at the scene, and the bus resumed its route as directed. According to bus GPS, the driver was operating within the posted speed limit. She has had no accidents prior to yesterday's incident.

"Today the owner of the dog was at the bus stop to confront the driver, and law enforcement was contacted. Officials intervened and the route resumed with a delay.

"We are sorry for the owner's loss, and we understand that this matter is upsetting. This was an unfortunate accident, and the driver has extended an apology. With that being said, the proper protocol was followed in this situation. The safety of our students is always a top priority."

"I'm glad I have closure, and I know what happened," Dunstone said. "But I don't feel like it's been handled correctly by anybody. And you can't bring her back - nothing's going to fix what happened, but a genuine apology would have been nice."

Despite the district's assertion that the bus driver was going the speed limit at the time of the crash, Dunstone said she is concerned about how fast bus drivers travel along that stretch, a concern echoed by multiple neighbors off-camera.

"The problem that is now happening is she's constantly speeding, but they won't put someone here to catch the speeders," Dunstone said.

"It would be good for like both of our hearts. It would help us heal through the whole thing ... so it's just hard to go over such a huge loss all over again," Dunstone said.

A Franklin County Schools spokesperson said the bus driver has worked for the district since May 2018, and driven since January 2019.

The spokesperson added that the driver involved was not punished, has no previous disciplinary record, and the district has not launched an investigation into the matter.