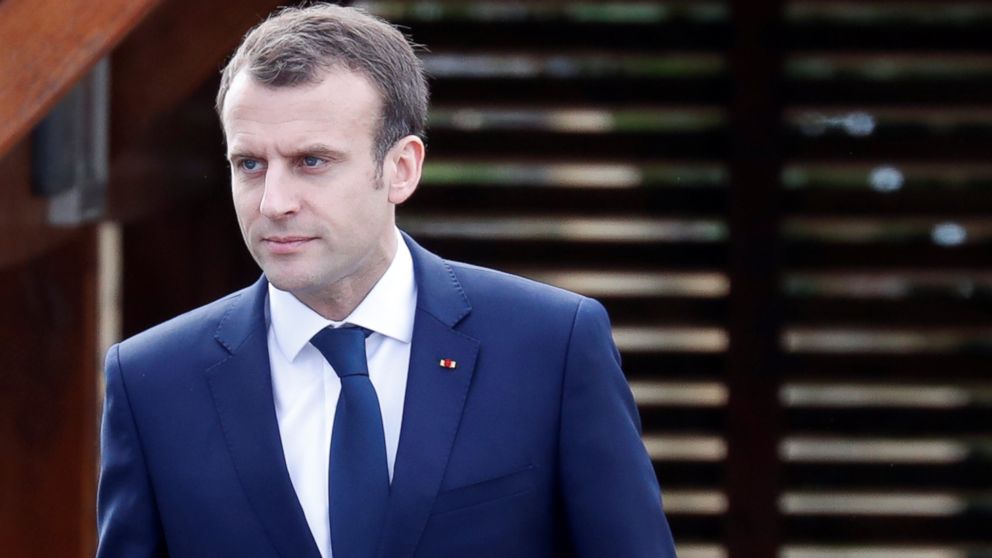 LONDON -- France has evidence that Syria used chemical weapons against its own citizens, French President Emmanuel Macron President said this afternoon, five days after a suspected chemical attack there.

"We have the proof that last week ... chemical weapons - at least chlorine gas - were used by [President Bashar] Assad's regime," Macron told a French today.

As for a response, "We have to make a decision at the right moment, when we will consider it useful and the most effective," Macron said, adding that he is "working closely" with the United States.

But the international watchdog charged with independently verifying the chemical attack, the Organization for the Prohibition of Chemical Weapons (OPCW), has not yet been given access to the site of the alleged chemical attack in Douma.

The OPCW's inspection team is on its way to Syria and will start work Saturday, the organization tweeted today. But getting access to the site may still be a challenge. The Russian military this morning said it was completely in control of the once rebel-held Douma and had raised a Syrian flag in the suburb just outside of Damascus.

The French president's conclusion confirms an independent analysis published Wednesday by a website called Bellingcat, based on open-source material.

Eliot Higgins, a British researcher and independent journalist, runs Bellingcat, which digs into the digital forensics of events mostly inside Syria, focusing on the weaponry used in attacks, both conventional and chemical.

He has become in recent years one of the foremost experts on the munitions used in the Syrian conflict and a vital resource to journalists.

As soon as Higgins saw the reports of a chemical weapons attack rolling in Sunday, he got to work.

"Reports indicated that a significant number of people, including children, had been killed by these attacks," Higgins wrote at the top of his analysis.

Eyewitness accounts from the ground came in the form of disturbing videos showing children frothing at the mouth, unable to breathe.

Frame by frame, Higgins went through the video and photos that emerged, identifying markings on the buildings in order to confirm the video and pictures were from Douma, a suburb outside of Damascus that activists and doctors said was attacked by the Assad regime.

The Russian foreign ministry said their samples were clean. The "Russian specialists" who visited the site "found no traces of chlorine or any other chemical substance used against civilians," according to Foreign Minister Sergei Lavrov.

"They went into the building and found nothing," he told ABC News, noting his concern the Russians may have tampered with evidence the OPCW will need. "We have no idea what they were doing in that building."

Higgins' team was then able to geolocate another video shot by activists showing a yellow gas cylinder on the roof of the same building where the Russians visited and where activists said the attack happened.

Inside this building, Higgins' team counted in photos 34 dead bodies throughout the immediate area.

Additionally "an estimated 500 patients presented to health facilities exhibiting signs and symptoms consistent with exposure to toxic chemicals," the World Health Organization said, according to reports from its partners.

"In particular," the WHO statement continued, "there were signs of severe irritation of mucous membranes, respiratory failure and disruption to central nervous systems of those exposed."

ABC News has been unable to independently verify either number but they are consistent with what ABC News has heard from eyewitnesses in Douma. The OPCW will produce the only official report of the incident.

Other video emerged showing the same kind of yellow gas cylinder on a bed in an unknown location.

"The external modifications on the above cylinder are particularly interesting as they are consistent with modifications seen on other gas cylinders used in other reported aerial chlorine attacks," according to Higgins' analysis.

- Eliot Higgins (@EliotHiggins) April 8, 2018Such munitions are dropped by helicopters, Higgins said, and the OPCW has determined that yellow gas cylinders have been dropped by helicopters in previous chemical weapons attacks, according to The Associated Press, which has seen the reports.

But Higgins' team was also able to determine from where the helicopters took off.

"Aircraft observers that are part of the Sentry Syrian network observed two Hip helicopters heading southwest from Dumayr Airbase," Higgins wrote, mentioning a regime airbase, "northeast of Damascus, in the direction of Douma, 30 minutes before the chemical attack in Douma, and two Hip helicopters were observed above Douma shortly before the attack."

But from where Higgins sits, at home in the U.K., there are still unknowns.

"One thing that's confusing," he said, "is that the doctors are all adamant that there are Sarin-like symptoms but this may be because of overexposure to chlorine."

But, he added, "there does seem to be another chemical agent but I don't think it's Sarin."

In the analysis, he wrote "it is important to note that these yellow gas cylinders are not associated with the use of Sarin, and as Sarin is a liquid a compressed gas cylinder seems an unlikely method of delivery for Sarin. Possible explanations for the allegations of Sarin use may be a result of the severity of the symptoms presented, of an undocumented munition being used, or another chemical agent being used that presents symptoms that could be confused with Sarin use."

There are limits to investigating from afar, Higgins acknowledged, which is why it's crucial that the OPCW get to the site and start testing the clothing and blood of victims. Whether they will find another kind of munition that could have carried a different chemical is an open question.

In Higgins opinion, that would be one way to explain an additional chemical and the Sarin-like symptoms.

Higgins' analysis concluded that "based on the available evidence, it is highly likely the 34+ victims killed in the 7:30pm attack on the apartment building near al-Shuhada Square were killed as a result of a gas cylinder filled with what is most likely chlorine gas being dropped from a Hip helicopter originating from Dumayr Airbase."

"The thing is with this," he explained, "there have been constant chemical attacks this year. Five to six already this year. The only thing that's special about this one is that it got noticed.

"If it was dropped just a few meters to the other direction, those people in that building probably wouldn't have died," he added. "A matter of meters between a big news story or just another chemical attack."
Report a correction or typo
Related topics:
abc newsnational
Copyright © 2020 ABC News Internet Ventures.
More Videos
From CNN Newsource affiliates
TOP STORIES