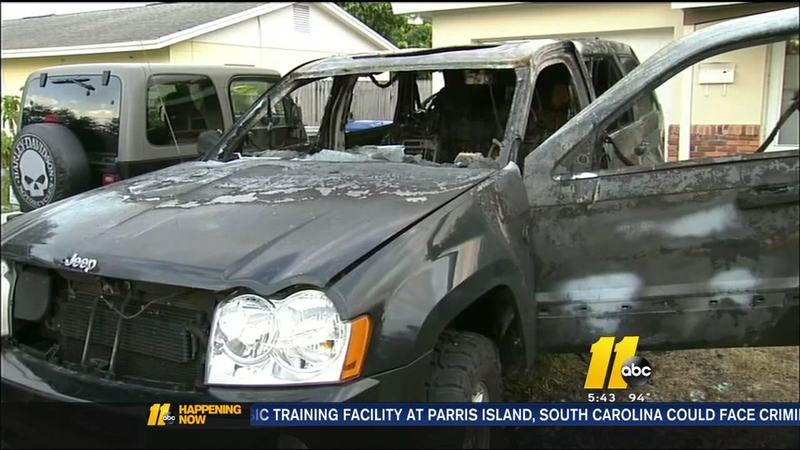 FLORIDA (WTVD) -- A Florida man found out the hard way why a recall was issued for his Samsung Galaxy Note 7 smartphone.

His phone exploded and engulfed his Jeep in flames.

Nathan Dornacher said he had just unloaded a desk from the vehicle and left his Note 7 charging in the center console. He said the family dog knew something wasn't right, and the next thing he knew, the Jeep was up in flames.

The incident happened on Labor Day and happened just days after the Korean tech giant announced that it was recalling and suspending sales of its Galaxy Note7 smartphone after reports of fires while charging.

"Not the barbecue I wanted on my day off," Dornacher wrote on Facebook.

Firefighters quickly responded and were able to put the flames out, but not before the vehicle's interior was irreversibly damaged, according to Lt. Steve Lawrence, public information officer for St. Petersburg Fire Rescue.

"The vehicle was a total loss," he told ABC News today. "But fortunately, no one was hurt or injured."

Lawrence added that the fire department is still investigating the cause of the fire.

A Samsung spokesperson told ABC News today that Samsung was "aware of the incident" and that it was "working with Mr. Dornacher to investigate his case and ensure" the company was doing everything it could for him.

MORE INFO ABOUT THE NOTE 7 RECALL ON SAMSUNG'S WEB SITE

"Consumer safety is Samsung's highest priority," the Samsung spokesperson said. "With regard to the Galaxy Note7, we are asking owners to take advantage of the Product Exchange Program announced on Friday of last week. The program offers Note7 owners the opportunity to exchange the phone for a new one."