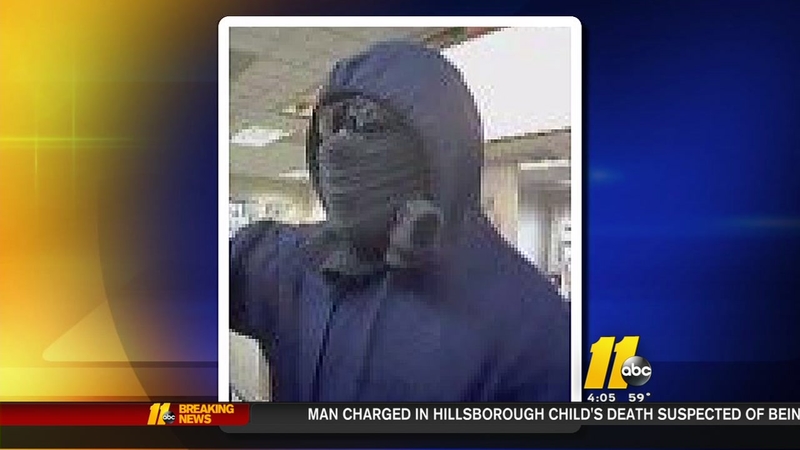 Search on for masked bank robber

GARNER, North Carolina (WTVD) -- Police in Garner are looking for a man who robbed a SunTrust bank in Garner Wednesday.

It happened about 11:05 a.m. at a branch on Small Pine Drive before noon.

Police said a man walked in wearing a blue sweatshirt, dark glasses, and a black scarf wrapped around his face. Authorities say he slipped a note under the teller window demanding an undisclosed amount of cash.

Police tweeted a photo of a man with his face completely covered with a mask.

Police said they believe he was armed with a gun.

The teller did not put up a fight and handed over the money.

"The teller did the correct thing," said Garner Capt. Joseph Binns. "Money is less important than any kind of injury."

The robber took off running with an undisclosed amount of money and went south on 401.

Officers and K-9s canvassed neighborhoods near the bank. Law enforcement focused their efforts on a lot just across the street from the Fred Smith Elementary School.

"We didn't come up with anything at this point, but we a lot of leads to follow up on," Binns said. "Anytime we have this type robbery, it's obviously very serious. It's right around the holidays."