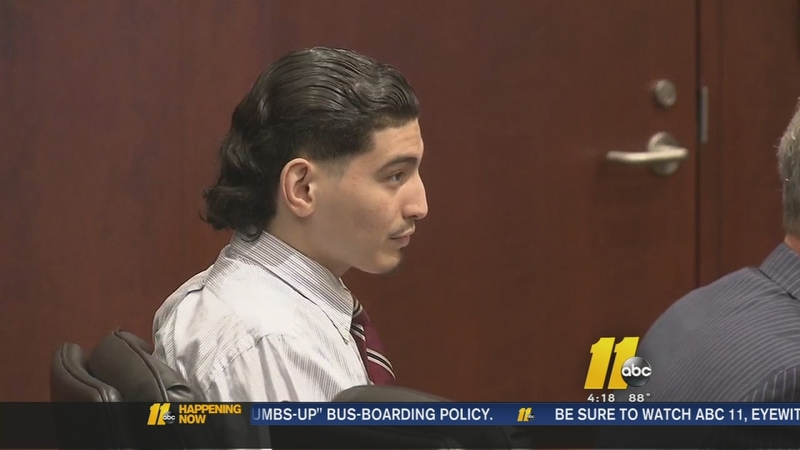 WAKE COUNTY (WTVD) -- The man claiming to be the getaway driver in what prosecutors say was the mistaken identity murders of a Wake County couple took the witness stand Thursday and said Jonathan Santillan was there.

Jose Samuel Flores Mendoza and Maria Saravia Mendoza were gunned down inside their house in the 700 block of Colonial Drive on Jan. 5, 2013.

On the witness stand Thursday, Moise Reyes said he drove the pair to the duplex where they thought a rival gang member lived. But a year earlier, the Mendozas and their two young sons had moved into the home when the gang member moved out.

"They took a rifle and a handgun," said Reyes, who testified the long gun was an AK-47 assault rifle.

When asked how many, he replied "a lot."

Ed Welch, who was a veteran investigator at the time of the shooting, detailed for the jury what he saw at the scene.

"It was very disturbing in all honesty," he said. "Something I had never seen before and honestly to learn the facts and circumstances surrounding what had happened. Yeah, very, very emotional."

Welch, a veteran detective, says scene was "Something I had never seen before." #SantilllanTrial #ABC11Eyewitness pic.twitter.com/yilVu701ZR

Welch also testified about searching a home and finding Santillan hiding in the attic. While on the stand, he identified numerous weapons and ammunition found during the search, including the assault rifle and pistol believed to be used to kill the Mendozas.

The Mendozas' 3-year-old child was also in the home at the time of the killings, but was not hurt. The couple's older child was not at the house.

Some of the most emotional testimony came from neighbors Wednesday who witnessed the aftermath of the shooting through an open door where they said they could see the Mendoza's 3-year old son crying uncontrollably.

"What hit me was the sadness of the child," said Israel Puerta. "He was crying, hugging his father."

Celia Gonzalez talks about earlier gang fight in which a friend was shot. #SantillanTrial ABC11Eyewitness pic.twitter.com/INWyEtzjtm