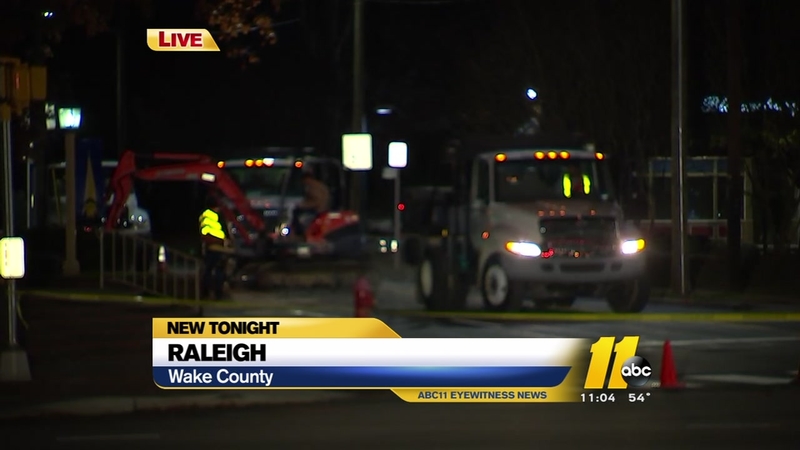 RALEIGH (WTVD) -- As of about 8 p.m., most of the roads radiating from the Five Points area have been reopened to traffic.

They were closed earlier on Thursday afternoon due to a gas leak on Whitaker Mill Road. A portion of Whitaker Mill road in front of Hayes Barton Baptist Church and the section of Glenn Avenue next to Yadkin Bank, remain closed.

Crews working along on Whitaker Mill hit a gas line.

"Around one o'clock or so an AT&T construction crew was boring through to lay some fiber optic cable and inadvertently hit a gas line," said Rick Marcotte. His wife owns interior design studio Form & Function on Glenwood Avenue.

"There was a lot of gas coming up through the manhole covers, the crew had to run away and the fire department showed up and started evacuating all the buildings," Marcotte said.

Form & Function was just one of several businesses in the area forced to evacuate.

About 4:30 p.m., the fire department said the gas leak had been stopped but it would be a while before crews could cap it.

They said a large diameter distribution line that is buried under street was cut when the crew was digging into the street.

To fix the line, the gas company has to dig up parts of the road, so the repair is not expected to be a quick process.

"Today is a huge loss of revenue," Marcotte said. "I don't know how long it's going to actually take them to repair."

Meantime, businesses just outside the evacuation zone were fighting to keep business.

"We've been putting out on Facebook and Instagram, yes we're open come in!" said Anne Downey, manager at NOFO at the Pig on Fairview Road.

She said while people from the evacuated businesses came to eat at her restaurant, it wasn't the same.

"We didn't get our usual influx of people because they couldn't access us," Downey said.

She described the entire ordeal as intense and said she heard parents frustrated about having trouble getting to their children at Underwood Elementary School on Glenwood Avenue.

Police officers responded to the scene about 12:30 p.m.

Hazmat and firefighters were also at the scene.

An estimated completion time for the repairs is not available.