Gay marriages could begin by next week in Va., is North Carolina next? 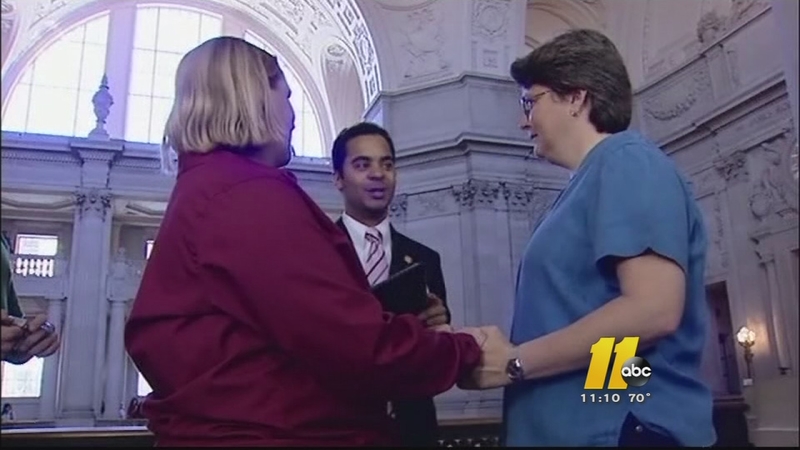 Gay marriages could begin by next week in Va.

The 4th Circuit Court of Appeals Wednesday refused to delay a ruling that strikes down Virginia's gay marriage ban.

For a family of three in Wake Forest, Wednesday's ruling was reason for hope.

Johnson and Shawn Long have been committed partners for 20 years. Their adopted son Isiah is now 12. But what they want, and can't have is a "legally recognized" marriage in North Carolina.

"Marriage is a big symbol that says you're a family and we've had situations because we're not married [where] Isaiah has been treated, he's seen us as something other than a family", explained Long.

The 4th Circuit Court of Appeals' refusal Wednesday to delay its ruling striking down Virginia's gay marriage ban gave more hope to same-sex couples here, that North Carolina's version of the law would be thrown out too.

"We can't predict exactly when it's going to be. We don't know if we're going to have to wait for the full U.S. Supreme Court to hear this next year", said Chris Sgro, the Executive Director of Equality NC. "But absolutely couple should be excited that they're not going to have to wait much longer".

Same-sex couples in Virginia could begin marrying as early as next week. And North Carolina, because it falls inside the 4th circuit, could follow suit. County clerks here may use the ruling as legal precedent.

University of Denver law professor, Nancy Leong told the Associated Press Wednesday, "While clerks in other states within the 4th Circuit wouldn't technically have to begin issuing licenses as well, federal courts in the state would likely make them if they don't."

On the other side of the issue are advocates like Tami Fitzgerald, a staunch proponent of traditional marriage. She says until an ultimate decision from the Supreme Court, North Carolina's county clerk shouldn't take any cues from Virginia.

"The North Carolina marriage amendment is still in place and so if they were to go out and start issuing same-sex marriage licenses tomorrow they would be violating the law", Fitzgerald said.

The Chief Justice of the Supreme Court, John Roberts, is expected to decide very soon on whether to overrule the 4th circuit and delay the decision to strike down Virginia's gay marriage ban. The delay would give the entire high court time to review the cases.

If Roberts chooses not to act, gay couples in Virginia could get marriage licenses by next week. And, advocates here, say North Carolina couples would not be far behind.