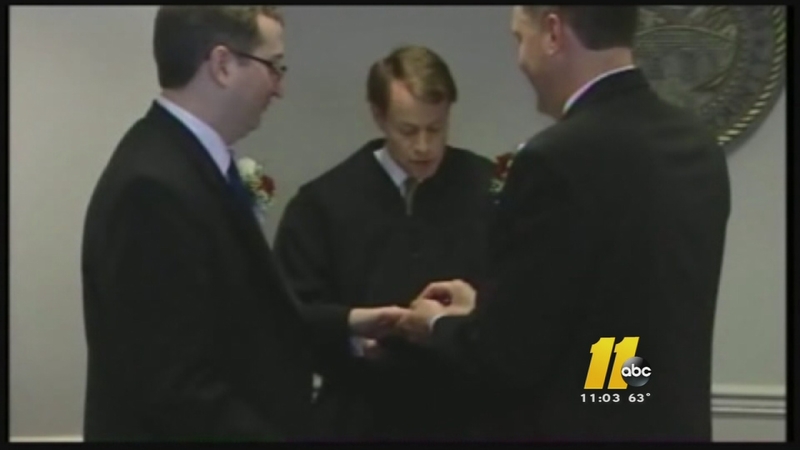 Same-sex marriages could begin as early as Thursday

RALEIGH -- A federal judge in North Carolina has lifted stays in two cases challenging the state's ban on same-sex marriages on Wednesday, a possible sign he's preparing to strike down the prohibition as unconstitutional.

Osteen had issued the stays in July, after Virginia's same-sex marriage ban was struck down by the 4th Circuit Court of Appeals in Richmond, which has jurisdiction over North Carolina. The U.S. Supreme Court on Monday refused to hear an appeal of the Virginia case, triggering a flurry of legal filings in North Carolina.

In an order this week, Osteen cited the 4th Circuit ruling and stated his intention to rule in favor of the nine couples challenging the state's marriage ban and child adoption rights for same-sex partners. Lawyers for the American Civil Liberties Union of North Carolina worked feverishly into the evening Wednesday to file the needed paperwork in the hopes of securing their clients' ability to marry as early as Thursday morning.

The prospect that a ruling from one or the other judge could be imminent sparked excitement among same-sex couples who have waited for years to either get married in their home state or have their marriages from other states legally recognized.

During an unrelated event Thursday, NC Gov. Pat McCrory commented on the process.

"I was disappointed in the initial ruling," he said. "It's my job to follow the law and respect the process and that is exactly what I am going to do with both the marriage ruling and the voting ruling ... I am going to both."

In Greensboro, Guilford County Register of Deeds Jeff Thigpen kept his office open an hour late Wednesday just in case a ruling came through that would allow him to issue a marriage license to a waiting same-sex couple. He closed up about 6 p.m.

"I'm calling all my staff tonight and telling them to prepare for tomorrow," Thigpen said Wednesday evening. "It's going to be controlled chaos."

At the Mecklenburg County Courthouse in Charlotte, Scott Lindsley and Joey Hewell camped out at the register of deeds office starting at 11 a.m. Wednesday in the hopes of being the first local couple to have a marriage license granted. Staff there allowed them to submit a marriage application shortly before the office closed at 5 p.m., but said it couldn't be processed until a judge gives the order striking down the ban.

"We have a reference number, which is closer than we've been in 12 years," Hewell said. "We'll be here at 7:45 with coffee and a breakfast burrito. When we get that paper, we'll be buying champagne."

In Wake County, the judge's ruling did not come down in time for a couple hoping to file for marriage license before end of business day. While they and same-sex couples across North Carolina prepare for matrimony, Republican leaders are preparing for a legal battle.

"This is no longer a difficult legal question," said Neil Siegel, a law professor at Duke University.

As we wait for a federal judge in Greensboro to overturn the state's same-sex marriage ban, which was done under the same court jurisdiction in Virginia, Siegel says legally, those supporting the ban no longer have a dog in the fight.

"Given that the 4th Circuit decision is the law in North Carolina, given that the U.S. Supreme Court has declined to get involved," said Siegel.

But the state's top Republicans, House Speaker Thom Tillis and Senate President Phil Berger, have already vowed to intervene. They argue 60 percent of voters adopted the ban in 2012.

The man sworn to defend the ban here in North Carolina, Attorney General Roy Cooper, has for months said he's done defending the ban. Outside of that, Siegel says he doesn't think lawmakers have a legal leg to stand on just because voters chose the ban two years.

"That argument that a large percentage of the public really is in favor of Amendment One, that argument really blows up the institution of constitutional law. You have to say something more than just the public really wants this or the public is really opposed to same-sex marriage, large portions of the American public, or in the North Carolina public, used to be very much opposed to interracial marriage," said Siegel.

"The fallacy there is there's absolutely nothing in the constitution that says that a state cannot prohibit same-sex marriage," argued Stam, "I think there's a realistic chance we will ultimately win and the U.S. Supreme Court will have created chaos."

Meaning what will likely result in thousands of marriages and legal adoptions across North Carolina, could unravel if Stam's prediction of a win comes true. Still many are doubtful that will actually happen and those working at the Wake Register of Deeds are preparing themselves for the flood of couples they expect will be lining up for marriage licenses.