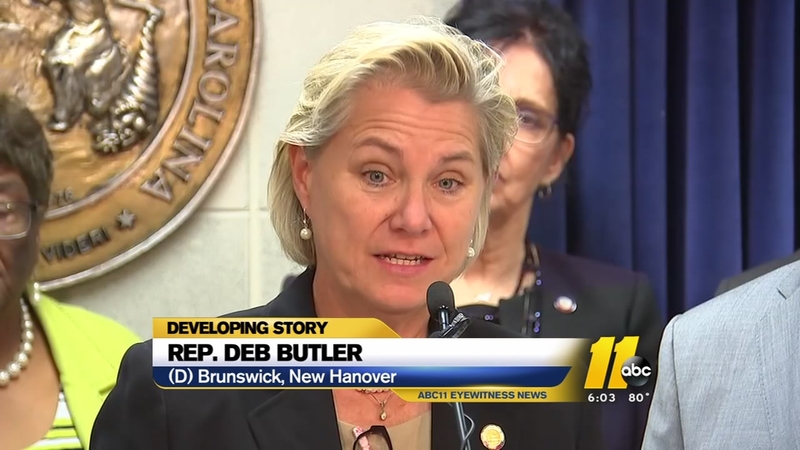 RALEIGH, North Carolina (WTVD) -- The General Assembly on Wednesday overrode Democratic Gov. Roy Cooper's veto of a wide-ranging environmental bill that provides money - but not enough according to Cooper - to address a little-studied chemical discharged into a river.

Returning to Raleigh for the third time since completing their primary annual work session in June, the Republican-controlled state House and Senate voted separately to approve the measure over Cooper's objections.

The measure gives $435,000 to help Wilmington-area utilities and the University of North Carolina at Wilmington to help treat and remove the chemical GenX from the Cape Fear River. A Bladen County plant discharged the chemical for years into the river until recently. That public disclosure surprised local residents and raised concerns because there are no federal health standards for the chemical. Officials have said the treated water is safe to drink.

Cooper and his allies complained the funding is insufficient and fails to address the underlying challenges of addressing "emerging contaminants" in drinking water sources. He wanted $2.6 million his agencies requested to beef up water quality experts and permit writers statewide. Cooper also opposed provisions within the measure affecting local landfills and ending a plastic bag ban on the Outer Banks.

Republicans supporting the override said directing the funds to the Wilmington area would actually help clean up drinking water there. Cooper's veto, if allowed to stand, would block that work, said GOP Rep. Larry Yarborough of Person County, a primary bill sponsor.

The bill "does not take any protections of our rivers and streams away," Yarborough said before the House's 70-44 override vote. "The governor's veto does nothing to affect that situation." With no debate, the Senate voted 30-9 for the override.

Rep. Deb Butler, a New Hanover County Democrat, said the piecemeal spending in the measure is the wrong approach. Cooper and other Democrats argue that recent Republican budgets have led to the elimination of at least 70 positions in water quality since 2013.

"Protecting drinking water from emerging contaminants will require a statewide solution and families shouldn't suffer under the illusion that this legislation starts fixing the problem," Cooper said in a statement after the override.

Republicans say suggestions that spending reductions have contributed to the inability to address GenX are misguided, adding problems originated with state agencies in the 1980s.

Cooper has vetoed 12 bills since taking office in January. With Wednesday's votes, the legislature had overridden eight of them.

The legislature planned to remain in session through Thursday or Friday to consider other legislation, although what exactly will get approved remains unclear. Senate Republicans have been largely quiet about what else they want to consider. Their House counterparts already have a full list of tentative items.

House GOP leaders are interested in addressing at least two of Cooper's four other pending vetoes from the summer, according to an email Moore sent last week to Republican colleagues. One is a regulatory bill, while the other allows legal notices in Guilford County to be posted on government websites, instead of in newspapers. A House committee approved a new measure Wednesday morning that contains the Guilford County pilot but is written in a way so that the measure isn't subject to Cooper's veto stamp.

Redrawing the election districts statewide for trial court judges and local prosecutors was atop Moore's list. The chairman of a House committee that debated judicial remapping in September said he expected the measure on the House floor Thursday. The changes would still have to be approved by the Senate, which appears less interested in a quick turnaround.

Democrats say the proposed maps are partisan and racial gerrymanders. Dozens of demonstrators opposed to the plan walked the halls of the Legislative Building.

The House and Senate budget committees also were to consider competing measures that make mostly technical corrections to the state budget.

Since adjourning its primary work session June 30, legislators reconvened for one day in early August, followed by two weeks later in the month chiefly to redraw General Assembly boundaries struck down by federal courts.