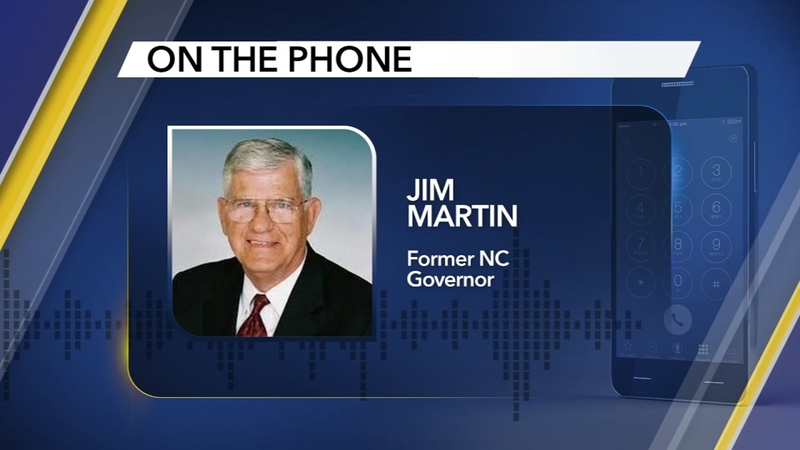 Flags flying at half staff are solemn tributes to the life and legacy of former President George Herbert Walker Bush.

But some people who don't watch cable news stations or spend time online were not aware that Bush died overnight at the age of 94 until they saw the Saturday morning local news or, in the case of former governor Jim Martin, until he got a call from Eyewitness News.

"Thank you Anthony," Martin said when reached by phone. "You did call, and I appreciate that. It was not in my morning paper. I know we're all mortal and he was advanced in age, yet he was such a fixture in our national as well as our personal world. We knew each other personally from our past experience, going back to when I was in Congress and he was the vice President."

Both men, high profile Republicans who led members of their party during critical years for North Carolina and America. Bush was president during Martin's second term as governor of North Carolina. They met years earlier, while serving in other roles in Washington D.C.

"He was not only in Congress, he was a CIA director, an ambassador to China, then was selected by President Reagan to be his running mate," said Martin.

Bush served a single term as president, his reelection bid derailed when he failed to follow through on his campaign trail promise: "Read my lips, no new taxes!"

"That was thrown back in his face when the Democrats managed to agree with him on some spending cuts that he wanted and some tax increases that he wanted," Martin said.

But the former president stayed active during the remainder of his long life, even skydiving to celebrate some of his final birthdays.

"I didn't decide to join him on that, but I have to admire his spunk! To pitch in with whatever's going on, to enjoy his life and to test himself on things," Martin said.

That attitude is one of the reasons Martin admires Bush 41.

"The way he conducted himself in his public life, he was above reproach, he was very open in his dealings with people," said Martin.