Man wonders 'What if?' after driver crashes into house 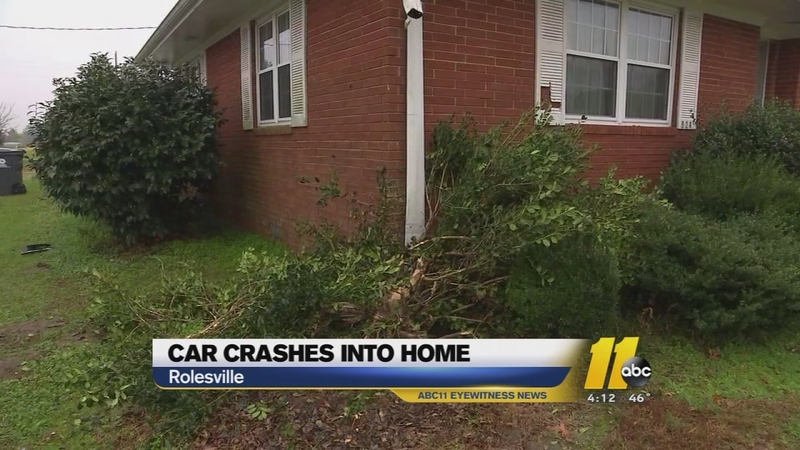 ROLESVILLE, N.C. (WTVD) -- George Garcia was asleep with his wife, and said neither of them heard a car hit their home in the 500 block of Averette Road sometime Saturday night or Sunday morning.

Garcia said he didn't realize anything had happened until about 4 a.m. Sunday when he came outside to get the newspaper.

That's when he saw a gray 2006 Honda Accord positioned along the side of his house. It looked like it ricocheted off the brick and spun around. The driver was lying in the grass on the passenger side unresponsive.

The State Highway Patrol said 22-year-old Delonte Jeffrey Fennell of Rolesville ran the stop sign at Jones Dairy Road and Averette Road before traveling through an open field and through a row of trees before crashing into the edge of Garcia's house.

Garcia said in the last year and a half, four other drivers have run the same stop sign where Jones Dairy Road T's into Averette Road before careening into his yard.

"The roads here are not designed for the development that is happening here," he said, pointing to signs he said the N.C. Department of Transportation posted recently that warn drivers of the stop.

Steve Abbott, NCDOT spokesperson, told ABC11 Monday that now that there has been a fatality near the intersection a traffic safety team will review the police report and survey the intersection to see if further improvements need to be made.

"We're not anticipating and pre-planning," said Garcia who called DOT first thing Monday morning to request an upgrade to the intersection. "We're letting the circumstances drive the process."

The State Highway Patrol said alcohol was not a factor in the crash. It is still unclear whether any medical conditions played a role leading up to Fennell running the stop sign.