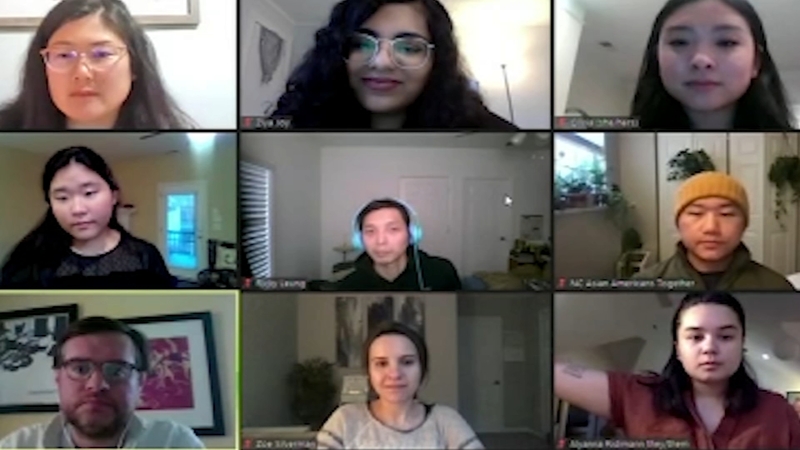 Members of the Triangle community took part in a virtual vigil Wednesday night following the deadly shootings at three spas in Georgia. Eight people, including six women of Asian descent, were killed in the attacks.

"It can be really hard on days like this. But I'll tell you one thing, and that is that we really are stronger together," said Heidi Kim, the Director of the Asian American Center at UNC-Chapel Hill.


The service, organized by North Carolina Asian Americans Together (NCAAT) and the Asian American Center, took place amidst calls for change. Thursday morning, State Senator Jay Chaudhuri (D-Wake), who spoke at Wednesday's vigil, shared that he would file the Hate Crimes Prevention Act during this legislative session. State. Sen. Chaudhuri will be joined by Senator Valerie Foushee (D-Chatham, Orange) and Senator Mujtaba Mohammed (D-Mecklenburg) in the filing.

Tonight I joined members of our Asian American community to remember the lives of those we have lost to horrific violence, most recently last night in Atlanta. We are committed to supporting you and we stand with you tonight and always. https://t.co/K7qiGRcWek

A 2016 report from NCAAT found there were an estimated 300,000 Asian-Americans in the state, with Wake County having the largest population in the state.

"This definitely hits closer to home because this happened in the South, this happened in a neighboring state in a community that is very much like ours," said Chavi Khanna Koneru, the Co-Founder and Executive Director of NCAAT.

"It also brings to mind the isolation that sometimes I think our community, myself included, feel particularly in the South when there's not as big of a community," added Ricky Leung, the Senior Director of Programs works for NCAAT.


Authorities in Georgia say initial conversations with the suspect revealed he may have been motivated by "sexual addiction," and are continuing to determine if racism played a role.
EMBED More News Videos

"People trying to divorce the concept of hate crimes, 'this couldn't be a hate crime, it must have been sexually motivated.' But we know that there's this context of sexualization and fetishization of women in our communities," said Phian Tran, the Voter Engagement Director with NCAAT.

"Is this now normalized? Are we desensitized to this," said Koneru.