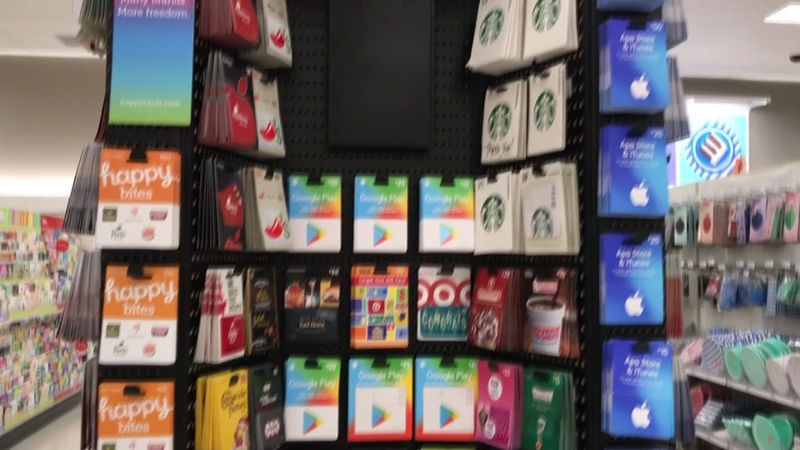 RALEIGH (WTVD) -- Gift cards are an easy, popular gift this holiday season, but be careful when buying them.

Darlene Duncan learned that the hard way after she bought a $200 Visa gift card at a Walmart in Raleigh to give as a wedding present for her son. She even took precaution before buying it.

"It was a cardboard container and, of course, I checked the back," Duncan said. "You actually had to pull down the tab to reveal the back, and it was completely intact, it had not been torn at all."

Duncan loaded the card with $200 at the register and gave it away at her son's rehearsal dinner. The happy couple tried to use it almost immediately.

"The very next day after the wedding they went to use it and were informed that there was only a $4 and some change balance," Darlene said. The balance was exactly $4.64, on what should have been a $200 gift card.

Darlene called the number on the back of the card, Green Dot. She said the representative on the phone told her the card was registered and used in California.

Investigators said this scam typically starts in the store. Scammers get access to the numbers on the back of the gift card, even the ones with a protective metallic strip. Once they have the numbers, they just keep checking to see if the card is activated and when it is, spend the money immediately.

That's what Darlene thinks happened to her.

"I was very disappointed, but I chalked it up to a lesson learned. I'd never do that again," she said.

Green Dot did send Darlene the remaining balance on the card which was $4.64. "Which doesn't even cover the price of the card," Darlene said. We did reach out to Green Dot and, while a representative said they would look into the case, he never got back to us with any explanation.

Here's the best advice to make sure this doesn't happen to you:

When buying the gift card, purchase it with a credit card that has fraud protection, that way you could be protected if something happens with the gift card.

Also, look closely at the card to make sure it hasn't been tampered with -- especially the metallic strip on that back.