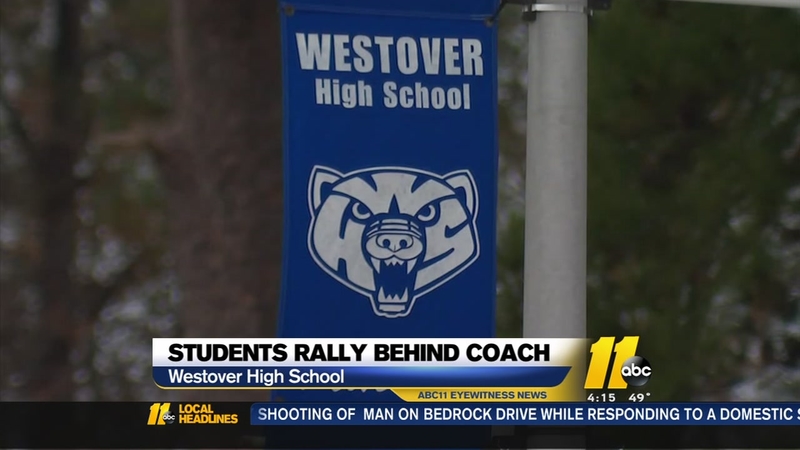 "We can tell that she has a passion and really brought life back into basketball," said senior standout Miranda Black, a girls basketball player for the Fayetteville school.

According to parents and players, Brown was suspended earlier this week for allegedly buying hotel rooms for the team last Friday as part of a team building activity.

Players say Coach Brown received approval from the school's athletic director prior to booking the rooms. When principal Dr. Vernon Lowery found out, Brown was suspended from teaching and coaching. The suspension began Tuesday morning.

Thursday, Brown was back in class. However, her fate with the basketball team remains unknown.

"Honestly, this is the first year that my passion has come back for basketball," Black said. "And everybody, we love her, and we want her coaching."

Thursday, dozens of students held a protest in the Westover gymnasium -- holding out of class until Brown was reinstated to the team.

"(Administrators) see how we're reacting to it," said team captain Daysha Carwise, who was among the students protesting. "Based off just our reaction, they can see that she's a good coach and we need her.

At some point during the protest, the fire alarm went off. Shortly after, rumors began to spread of a shooting on school campus, prompting the school to go into a code yellow lockdown. After determining a lack of credibility to the threat, administrators lifted the lockdown and parents were allowed to release their children early from school. For students who were not picked up, school returned to its normal schedule.

In a statement released to ABC11, Dr. Lowery said: "Students had a concern about an issue at school. When they were returning to class the fire alarms malfunctioned causing some disruption."

When asked about the relationship with Coach Brown and Dr. Lowery and the pending reinstatement, the school declined to comment.

We, as the parents of the Westover High School lady Wolverines, are here to express the pain in our hearts on behalf of our daughters. Our girls have had their beloved coach ripped away from them for what feels like the most unjust and unfounded of reasons. Coach has done nothing, but ensure that our girls are given access to a good program and help to push them to the their greatest potential. She has been harassed up to the point of being told that she was losing her job for hosting a team-building night which has been a tradition. Coach had the permission of all of the parents and the OK from the Westover athletic director.

Suddenly students were called into the principal's office and asked about the sexuality of other team members. Questions were inappropriate and offensive. This most suspicious behavior by the principal seems related to the administrators unusual conduct toward Coach. Our beloved coach has been nothing except for an excellent role model and we are disturbed by what seems to be a hunt of the most homophobic kind. You don't get rid of your most loyal, caring, and encouraging teachers. Please we are asking the Community to Support coach. She does not deserve this treatment. Reinstate her as the lady Wolverines coach, teacher, and mentor. Let us stand for well informed, student invested adults who can recognize the uniqueness of our differences.