Hero cop, nurse save Lumberton man who collapsed after saving couple from crash

ABC11 Together highlights the strength of the human spirit, good deeds, community needs, and how our viewers can help
WTVD
By Akilah Davis 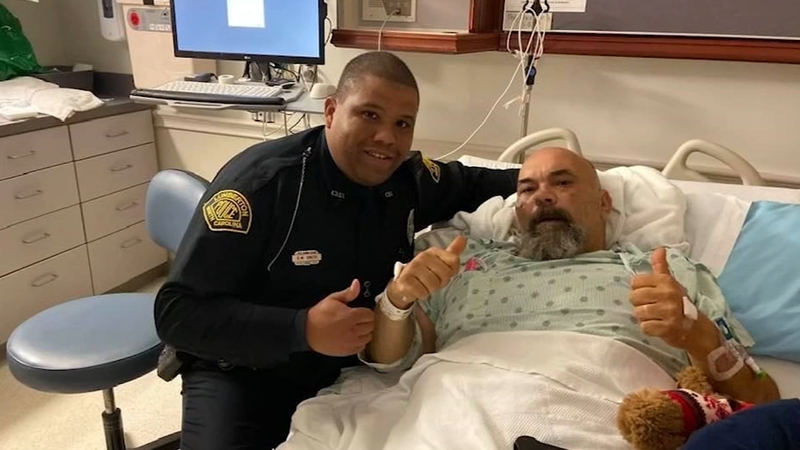 LUMBERTON, N.C. (WTVD) -- Friday afternoon was the first time James Locklear had been back to Cricklewood Street since December 10. On that day, he had a heart attack after using his pocket knife to cut deployed airbags from around an elderly couple involved in a car wreck. He didn't know moments later, he'd need to be saved himself.

On that day, he saw an elderly couple wreck their car. The former National Guardsman in Locklear sprung into action, using his pocket knife to cut the airbags from around them and pulling them to safety. He didn't know moments later, he'd need to be saved himself.

He collapsed from a heart attack in the middle of the road. Nurse Alison Wright saw Locklear fall and rushed to help.

"That's all I could think. He was the hero here. He was the one who saved somebody from a smoking car. Saved her life and then he went down. This can't happen," Wright said.

"He took a real deep breath. He opened his eyes and looked at me," Officer Daniel Smith said. "At that time, I realized he had a pulse. Everyone started clapping."

Smith said he visited Locklear during his eight-day stay at the hospital. Friday, the two heroes reunited with a man thankful to be alive today.

"Just seeing them knowing these are the folks who basically saved me," Locklear said. "They are the reason I'm still here."