On one year anniversary, reward offered for information in GOP headquarters vandalism 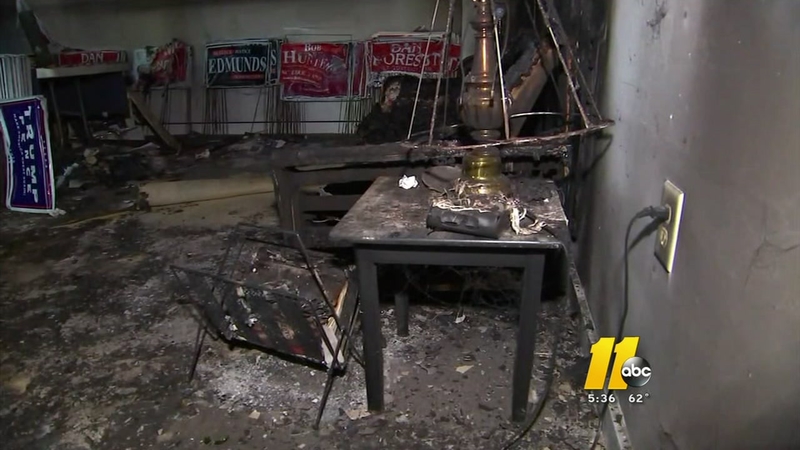 HILLSBOROUGH, North Carolina (WTVD) -- One year ago, the Orange County Republican Party headquarters was vandalized, and the person responsible is still at large.

"We are making every effort we can to stimulate the memory bank of the public in general but those people in particular who perpetrated this absolutely unacceptable act of domestic political terrorism," said NCGOP Chair Robin Hayes. "There are one or more people who know what happened and who did it. That person needs to have an attack of conscience and come to the forefront and confess."

In October 2016, the Republican headquarters located at 347 Ja-Max Drive suffered heavy damage when Molotov cocktail-type devices were thrown through the front window and graffiti covered the walls.

"NAZI REPUBLICANS LEAVE TOWN OR ELSE," was spray painted on one side.

"I've had good days on this job, and I've had bad days and that was a horrific one," said Dallas Woodhouse, the state Republican Party's Executive Director. "It was so frightening at the time."

Woodhouse and others recalled what it was like to learn that the office had been vandalized and torched.

"This was in the middle of an election season," he said. "We were enormously fortunate that nobody died in that. The people who did this had no idea who may or may not have been in this building at the time. Especially a couple weeks before a major national election. And what, of course, was more frightening about it, is we didn't know what was next."

Woodhouse shut down over 100 county offices just weeks before the election. Eleanor Poole-Koper was one of the first on the scene after the fire was discovered. Her memory? The ash on her hands from cleaning up.

"You just couldn't clean them. Every night, I would go home and take showers, but I still smelled like smoke."

After investigating, police identified a vehicle that drove down the Daniel Boone shopping center at approximately 2:55 a.m. in October 2016 as the likely vehicle involved.

The car passed all businesses open at that time and drove in the direction of the Orange County GOP Office. Prior to making a right hand turn into the shopping center, the vehicle was driving north on NC-86 and passed under I-85.

Anyone who may have seen a car traveling in that area in the early morning hours should contact law enforcement.

The FBI is offering a $10,000 reward for information that leads to an arrest.