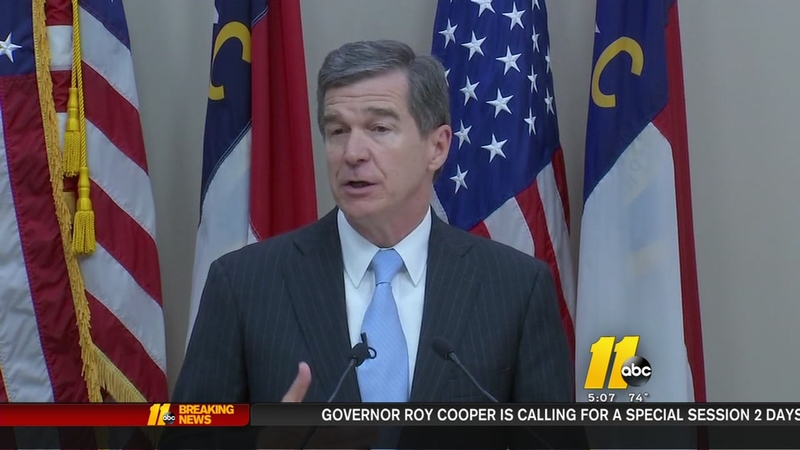 Cooper calls for a special session to redraw voting maps

The governor made the announcement in a news conference Wednesday afternoon.

He called for the session to begin Thursday and run concurrently with the regular session.

"Earlier this week, the United States Supreme Court unanimously affirmed that North Carolina's legislative maps are unconstitutional because they were racially gerrymandered," Cooper said. "That means Republican politicians have been picking their voters instead of voters picking their politicians."

"Gov. Cooper has no constitutional role in redistricting, and we have no order from the courts to redraw maps by his preferred timeline," the GOP lawmakers said. "This is a clear political stunt meant to deter lawmakers from our work on raising teacher pay, providing relief to the communities affected by Hurricane Matthew and putting money back into the pockets of middle-class families. We are already in session, and will continue to focus on this important work."

The governor's office said though it is unusual for a special session to run during a regular session, it has happened before.

Cooper said having the sessions run concurrently will save taxpayer dollars.

"We applaud Governor Cooper on his decision to call a special session to draw new legislative maps," North Carolina Democratic Party Chairman Wayne Goodwin said. "The same Republicans who gave us these unconstitutional maps continue to show that they will do everything in their power to delay new maps, choosing to drag their feet instead of fixing their moral wrong. This special session will save taxpayers money, and is necessary for us to finally move out from under a dark cloud of a racial gerrymander that has hung over our state for far too long."
Report a correction or typo
Related topics:
politicsraleighvotingstate politicsroy cooper
Copyright © 2022 WTVD-TV. All Rights Reserved.
TOP STORIES
Raleigh fireworks new view will bring different feel: Mayor
NC Democrats respond to Roe v Wade decision
Johnston Co. commissioner charged with sex crime involving child
R. Kelly sentenced to 30 years on sex trafficking conviction
Justice Stephen Breyer announces when he will leave Supreme Court
NC abortion legal battle looms amid standoff between AG and GOP
FTC sues Walmart over scammers' use of money transfer services
Show More
Workers fired for not joining company's daily Christian prayer: EEOC
NC GOP unveils state budget; House backs Medicaid expansion path
JoJo Siwa joins 'High School Musical: The Musical: The Series'
Some pharmacies limiting Plan B pill purchases as demand spikes
ESSENCE Festival of Culture 2022: What to expect this year
More TOP STORIES News