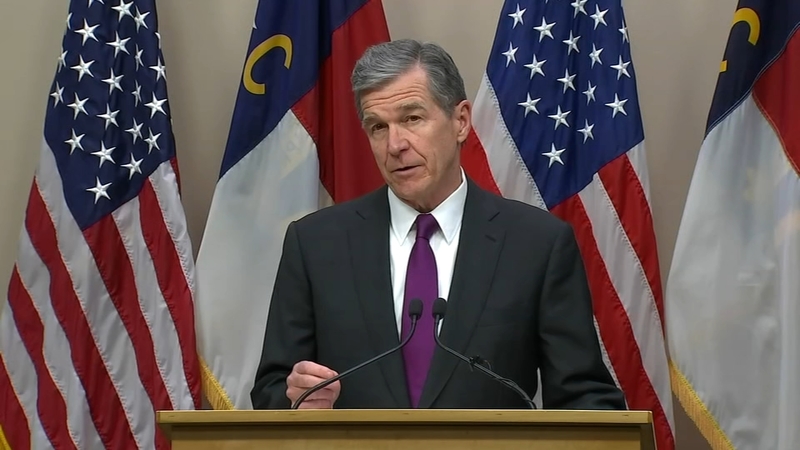 The Democratic governor unveiled his proposed adjustments to the second year of a two-year budget lawmakers approved and he signed last fall. They also include higher pay for state employees and teachers beyond what the enacted budget already directs.

"Despite a difficult few years, North Carolina families and communities are marching ahead with the resilience that has always defined us," Cooper told reporters. "The budget that I'm presenting today will build on our success and strengthen those areas that need reinforcement."

The budget proposal came two days after the General Assembly and Cooper's administration announced the state would exceed previous revenue projections for the current fiscal year by $4.2 billion, or 15%. That news also upped projections for the year starting July 1 by nearly $2 billion.

Cooper handles the overcollections by increasing second-year spending by $2.3 billion, or 8.5%, to $29.3 billion. But there's also another $2.4 billion going to a host of itemized "investments" he places in reserves for things like infrastructure, economic development and workforce training that does not count in the $29.3 billion.

The remaining $1.5 billion is unspent, but appropriating the rest is likely to breed skepticism among Republican legislators who will review his ideas before passing their own adjustments. House Speaker Tim Moore and Senate leader Phil Berger said this week that the increased risk for a national recession warranted the continuation of "responsible and disciplined spending." The legislative session begins next Wednesday.

Cooper's proposal contains neither additional tax cuts nor more money for state's rainy day fund. He pointed out that the fund is already on track to reach $4.25 billion once the new fiscal year begins July 1 and that income tax cuts are already contained in the current budget.

While calling his proposal "a smart, fiscally sound budget." Cooper also added: "I think that it's clear that (Republicans) want to invest more than they do." Any final legislative budget would be presented to the governor, who could let it become law or veto it.

Unlike last year, when lawmakers worked for months crafting a two-year plan because no comprehensive budget was in place, Republicans sound less willing to stay in Raleigh this summer since the current budget would continue if no agreement is reached with Cooper.

His proposal includes $687 million more for K-12 and University of North Carolina system construction projects and repairs; $102 million to improve potential sites to lure large companies to the state; and $165 million for affordable housing, including first-time homebuyer down payment assistance to low- and middle-income people.

The governor also wants to spend an additional $526 million to cover the next year of a public education spending remedial plan approved by a judge to meet standards cited in the long-standing "Leandro" litigation. The state Supreme Court could soon rule whether the courts can force lawmakers to fund the plan.

On pay raises, a 2.5% increase for most state employees set to begin in July would grow to 5%, while state law enforcement and health care workers would get a 7.5% increase. Teacher pay schedules would be adjusted to ensure instructors see a combined average 7.5% raise this year and next, instead of the current 5%. One-time bonuses of $1,500 to $3,000 also would be offered for workers and teachers.

State Budget Director Charlie Perusse said these and other compensation proposals are needed to address higher vacancy and turnover rates in the government workforce.

Cooper once again proposed expanding Medicaid to hundreds of thousands of additional low-income adults through the 2010 federal Affordable Care Act. While Republicans have opposed the idea for years, Berger said last year he's now open to expansion. A special House-Senate study committee began meeting in the winter to consider expansion and other health care access improvements.

"I believe that we're getting closer than ever to an agreement," Cooper said. "I do appreciate that Republican leaders are taking this seriously."

An impasse between Cooper and Republicans on Medicaid expansion was the chief reason why the state never had a comprehensive two-year budget approved in 2019.