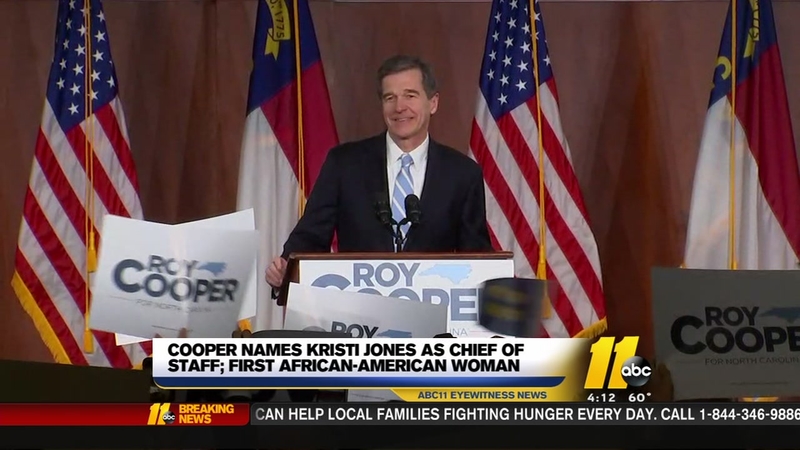 RALEIGH, North Carolina (WTVD) -- Governor-elect Roy Cooper said Tuesday night at a rally that he's ready to get to work.

So eager, in fact, that he's not waiting for inauguration day, Jan. 7, to be sworn in.

In a news release on Wednesday, the governor-elect announced that he plans to be sworn in on Jan. 1.

It's hardly an unprecedented move. Outgoing Gov. Pat McCrory was sworn in on Jan. 5, 2013, a full week before that year's Jan. 12 inauguration date.

Technically, all incoming NC governors begin their four-year terms on Jan. 1, according to the laws of the state. Many do it on a day of their choosing, generally before or on their inauguration date.

Kristi Jones will be Cooper's chief of staff. Ken Eudy will be senior advisor to the governor and Brad Adcock will serve as Cooper's legislative director.

"We have a short transition period and we need a team who can quickly navigate the learning curve," Cooper said. "Kristi Jones, Ken Eudy and Brad Adcock share my vision for making North Carolina once again among the most admired states."

Jones has served as Cooper's chief of staff in the N.C. Department of Justice for the past 12 years. She is a Wilson native who also served in the administration of Gov. Jim Hunt. She will be the first African-American woman to serve as a North Carolina governor's chief of staff.

Eudy, a former political reporter and later owner of a public relations and advertising agency, is a native of Oakboro, in Stanly County.

Adcock is a veteran lobbyist who worked for Blue Cross and Blue Shield of North Carolina for three decades. Adcock, is a Roxboro native. He is former chair of the board of trustees at Appalachian State University. He also served on the UNC Board of Governors.

"I can't wait to get started," said Cooper to end his Tuesday night speech, "Enjoy tonight, for tomorrow, we get to work."

Cooper, a Democrat, will serve as the state's 75th governor.