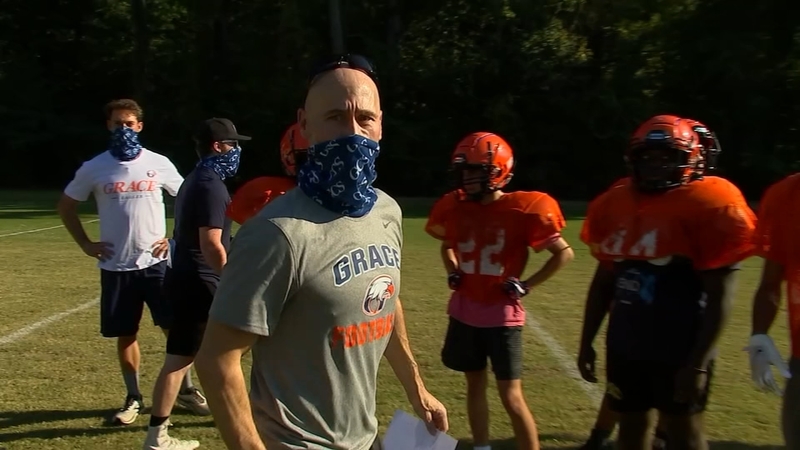 RALEIGH, N.C. (WTVD) -- The GRACE Christian School Eagles are fresh off a 2019 State 8-man Football Championship. While they are certainly eager to defend that title, the Eagles are mostly just happy to be playing at all.

"We have 12 seniors this year, so if they didn't have a season it would've been awful. So, to me, I think the No. 1 thing is that they're playing," Head Coach Keith Boutwell told ABC11.

Boutwell is in his eighth year coaching football at Grace and wouldn't trade it for the world. His only complaint is that he can't do it full time. So when the Eagles season looked threatened...

In the end, as a private school, Grace and similar institutions opted to play on, cobbling together a truncated six-game season. For senior quarterback Britton Kilby, any football is better than none.

"It definitely doesn't feel like a regular season because obviously there's no fans and things like that, but we're getting through as regular as possible," Kilby said. "Or trying to make it feel that way at least."

"It would've felt really different because we would have still had to have school, but with no football, it just wouldn't have felt right," Brown said.

Britton and Torrey and their teammates are split between online and in-person instruction. As such, practices are often the only time they all see each other together.

"We try to tend to talk to each other a lot, text a lot, whenever we can and we just communicate as much we can." Brown said.

For Boutwell, the time on the field coaching and interacting with his players is irreplaceable.

"I think the boys need it. They need some normalcy. Just that sense of community," Boutwell said. "That sense of team that they haven't felt in six, seven months."

The Eagles have been saddled with injuries this year and are off to an 0-2 start. They travel to Faith Christian school in Rocky Mount this Friday. Stacking some wins is of course the goal, but it doesn't seem so entirely crucial this year.

"For me to be able to play, I want to take full advantage of it and get to where I want to go." Brown said.