The horrifying footage shows the suspects lighting and throwing the firework at the victim, who was asleep on a sidewalk.
WTVD 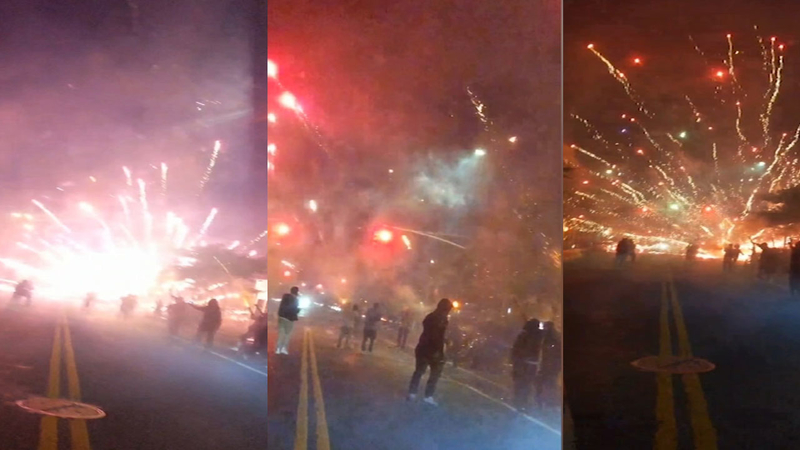 The footage, which was taken around 4 a.m. Monday, shows two people lighting and throwing the firework at a 66-year-old homeless man who was sleeping on the sidewalk. The firework then explodes.

The NYPD is investigating the attack, saying the man is in stable condition.

It is just one of more than 13,000 complaints involving illegal fireworks received by the city this month -- compared to just 32 between June 1 and June 22 in 2019 -- leaving many fed up and sparking a drive-by protest with horns honking outside Gracie Mansion overnight.

In response, Mayor Bill de Blasio announced the creation of a task force to crack down on illegal fireworks sales.

"It's more than we've ever seen it," he said. "Illegal fireworks are both dangerous and a public nuisance. We're cracking down on this activity at the source to ensure the safety of all New Yorkers and the ability of our neighbors to get some sleep."

The task force will target suppliers, distributors and possessors of large quantities of illegal fireworks by conducting investigations and sting operations within and outside of New York City to disrupt supply chains. The FDNY will also launch a public safety campaign, including public service announcements and social media, to illustrate the dangers of illegal fireworks.

The task force will consist of 10 officers from NYPD Intelligence Bureau, 12 FDNY Fire Marshals and 20 members of the Sheriff's Bureau of Criminal Investigation.

"For any number of reasons, the use of illegal firework has skyrocketed this year and that has damaged the quality of life in our neighborhoods," Police Commissioner Dermot Shea said. "The NYPD will continue to work closely with our city partners to address this dangerous issue."
EMBED More News Videos

The man who took the video told Eyewitness News he was driving home Saturday night when he saw a group of people coming around the corner setting off the fireworks.

Complaints about fireworks are also surging in Southern California, and residents are upset over the loud booms going off in their neighborhood.

In San Bernardino, a man's car was destroyed by fireworks. The loss of property comes as authorities in San Bernardino say they're getting six times the amount of calls compared to this time last year.

In Pasadena, the city reported a 400% increase in calls, and residents there say they are noticing the noise.

Firefighters are not only concerned about potential wildfires, house fires and destruction of property, but gruesome injuries from explosions gone wrong, such as injuries to eyes and hands.

Authorities attribute the rise in illegal fireworks to mainly boredom and restlessness due to COVID-19.

As the Fourth of July approaches, complaints about fireworks are surging across the country.