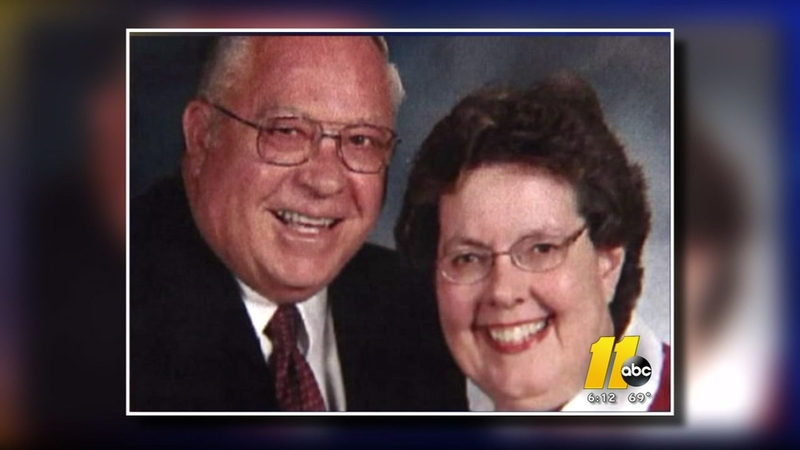 RALEIGH (WTVD) -- A motion filed by attorneys for a man facing the death penalty revealed new details in the murders of an elderly couple killed at their home near Oak Hill in Granville County on New Year's Eve 2014.

The deaths made national headlines when the accused killers set off on a multi-state crime spree from Texas to West Virginia.

The murders of 73-year old Jerome Faulkner and his 62-year old wife Dora were gruesome and random.

One of the suspects, 52-year-old Edward Campbell, later killed himself in Raleigh's Central Prison.

Now his son, the other suspect, is putting all the blame on his dad as he tries to stay off death row.

One major question of the case: Out of all the people Eric Campbell and his father Edward encountered in the days after leaving their Texas home in a stolen car, how did they single out the Faulkners?

Eric Campbell - now 23 - says it was because his father spotted Jerome Faulkner at his mailbox and decided to rob him.

From Campbell's just filed motion, "Near dusk on December 31, 2014, while driving, Edward Campbell saw Jerome Faulkner getting his mail and directed Eric to drive to a wooded area near the Faulkner home."

Just after dark Eric Campbell says his father knocked on the Faulkner's door and then sprayed Jerome Faulkner in the face with lye.

He soon heard both Faulkner and his wife Dora screaming.

In the motion, Campbell claims his father - who was facing criminal charges in Texas - had been physically and emotionally abusive to him, his brother, and their mother.
So he knew his father's tendency toward violence.

In the motion his attorneys say, "Eric did not want his father to rob or harm anyone. He was afraid of his father and afraid to try and stop him."

But minutes after going into the Faulkners' house - which was later torched - Eric Campbell says his father forced him to come inside.

That's when he claims he saw Jerome and Dora Faulkner injured on the floor.

The motion says the Faulkner's bodies were then loaded into their pickup truck which the Campbell's drove to West Virginia.

After shootout with police there the next day - New Year's 2015 - investigators found the bodies in the truck bed under a mattress.

In a hearing next week Campbell's attorneys will ask a Granville County judge to take the death penalty off the table.

If the judge refuses Campbell could be the first defendant to face a capital punishment trial in Granville County in 25 years.