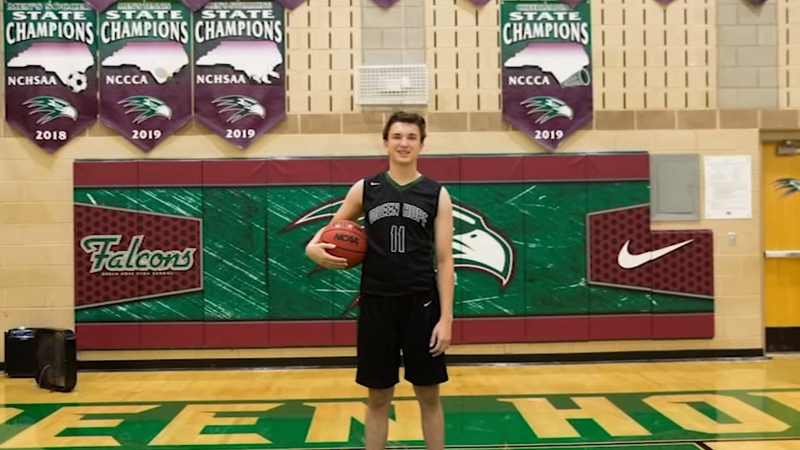 Green Hope player now in fight for his life

CARY, N.C. (WTVD) -- At only 18 years old, a Green Hope High School basketball player is about to begin the fight of his life.

In his senior year, Tyler Trexler should be starting this season for his varsity basketball team, but right now, he's focused on the several procedures he'll undergo Friday at Duke Cancer Center, followed by the first of more than a dozen rounds of aggressive chemotherapy treatments.

"I think his love of basketball is what'll save his life," said Mark Trexler, Tyler's father.

That pain led to Tyler's first MRI where doctors noticed an abnormality, eventually calling it a tumor, diagnosing the teen with Ewing Sarcoma, a rare form of bone cancer.

According to St. Jude, about 200 children and young adults are diagnosed with Ewing Sarcoma each year in the U.S.

"At first it seemed like I was OK with it, because it was somebody finally telling me, we realize there's something wrong with you and we're gonna help fix it and relieve the pain," Tyler said.

Much of Tyler's senior year though, will now be spent in the hospital.

Tyler is choosing to donate much of the more than $30,000 raised so far to help others like him; he's planning to give back to organizations such as the Sarcoma Foundation of America and Duke's Ronald McDonald House.

Tyler is trying to keep a positive outlook on the hard months ahead.

"Take it one day at a time, be where you are, be present, whether that's with your friends or family or going to the hospital every day with a good attitude," he said.

His persistence is perhaps unsurprising to his longtime coach Al Ellis who sent the following statement to ABC11:

"His work ethic is contagious and he never makes any excuses. Over this summer while Trexler has been struggling medically, he still attended workouts and gave everything he could physically give, this became our theme because we as a team could no longer make excuses and the team believes that if Trexler can do it what is my excuse."

Ellis went on to say:

"Because of him our team philosophy, is "Basketball is a team game, but it is when there is an ordeal in our lives, the way we choose to handle it, and the way we support each other, that is what make our team a family and what helps us grow as young men