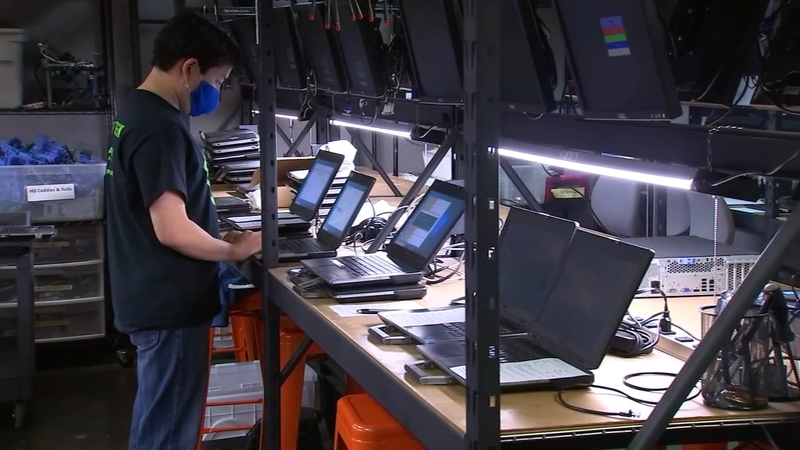 DURHAM, N.C. (WTVD) -- A Durham nonprofit that refurbishes computers to help bridge the digital divide has been in high demand during the pandemic.

And like a lot of nonprofits that serve the underserved the Kramden Institute is scrambling to meet those needs right now.

So, if you've been thinking of getting rid of that old laptop or desktop computer, the folks at Kramden would like to have it.

And if you've been reluctant to give it up because of information stored on it, Kramden can deal with that too.

"We wipe every single drive that we can. If the drive is too old to be wiped it goes into a secure container where it then gets physically shredded," Kramden's executive director Michael Abensour told ABC11.

He said it is that trust that has prompted tens of thousands of people to donate computers to Kramden since the institute was founded in 2003.

At the nonprofit's warehouse, computers that can be refurbished are given new life.

Those that can't are recycled.

And newer computers that are donated are often sold to help pay for parts for the old ones.

"Every week we get 50 families that call and say, hey my kid needs a computer or I have lots of kids and they all need a computer," Abensour said, and he added that the pick-up is contact free.

"So, they just call us and we put them out in carts outside with their name and their time, when they're supposed to come and show up and we wave them through out the window and that's it," he said.

And with most children still learning from home with online classes, the need has never been greater than it has been during the pandemic.

"It made us very popular overnight," he said laughing.

At the start of the pandemic, the institute gave away 500 in just one week.

Kramden, like a lot of other nonprofits with extra pandemic demands, needed a cash infusion.

To the rescue came pharmaceutical giant GlaxoSmithKline, which has a big presence in Research Triangle Park.

GSK gave Kramden and nine other Triangle nonprofits $40,000 each.

"It was a huge shot in the arm for us. It's going to have a big impact," said Abensour. He added that the generosity of other corporations and individual donors have also been on display during the pandemic.

But the biggest silver lining in the dark cloud that is the pandemic, he said, is that people have seen close-up the stark difference between those in our society who have the ability to connect to the internet and those who don't.

"It's kind of brought the digital divide into the national conversation, which we did not have before," he said. "People kind of said, 'Yeah it's a thing', but now everybody sees it for themselves across the state."