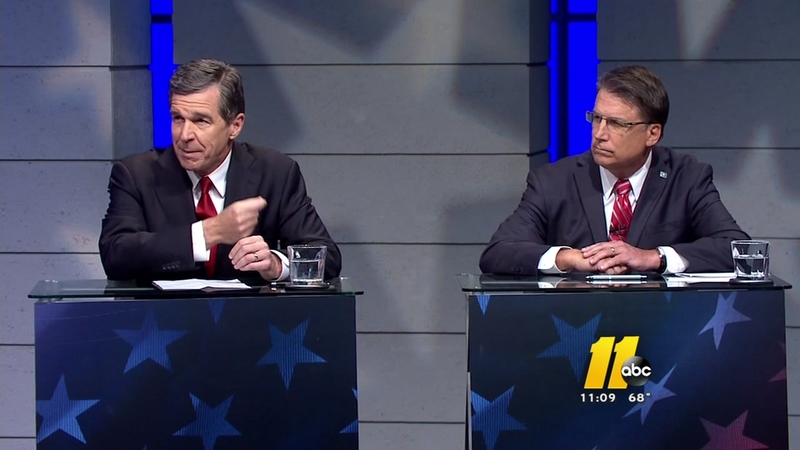 The debate marked the final time the two men can sway voters on such a stage, so they came out swinging.

Libertarian challenger Lon Cecil was on stage to debate as well.

McCrory vs Cooper part 2 about to begin. It's the 2nd and final NC gubernatorial #debate. This time, Libertarian candidate Lon Cecil debates pic.twitter.com/9j6HDUyppL

Here are the highlights of how the gubernatorial hopefuls responded on a variety of issues:

Cecil: "You have to learn from each flood. You have to spend the money to correct the things that happened."

McCrory: "The most tragic part of these hurricanes is that it hits the people who least can afford it."

McCrory: "For those people hurt, who are the poor-- we've extended unemployment insurance, we've helped with food stamps."

Cooper: "What we need is public officials who are going to listen to scientists, who are going to believe what they say, who act on that, who use data and facts, and don't let their political ideology rule the day."

McCrory: "There's not one email in his 14 years as attorney general where he has expressed concern about coal ash."

Cooper: "We're concerned about Governor McCrory's ties to Duke Energy and the fact that he had worked there so long."

McCrory: "We've had three years of false advertising by Roy Cooper's super PACs that have been literally running for 3 1/2 years, you know coal ash is on my hands as though I did the coal ash spill, which is totally ridiculous."

McCrory: "Our economy is so much better than it was three years ago."

Cooper: "(McCrory) has raised taxes on people in 67 different ways."

McCrory: "Are you going to change the tax cuts in income tax and business tax and corporate tax that we initiated, which has resulted in a strong economy? You were against them and you want to be the next governor. Are you going to repeal it?"

Cooper: "We do not need to increase taxes. What we need to do is fix some of those taxes that (McCrory) put on the middle class and small business."

PREVIOUS DEBATE: MCCRORY AND COOPER SPAR OVER HB2 AT DEBATE

The governor's race has been neck and neck since the summer and through the fall.