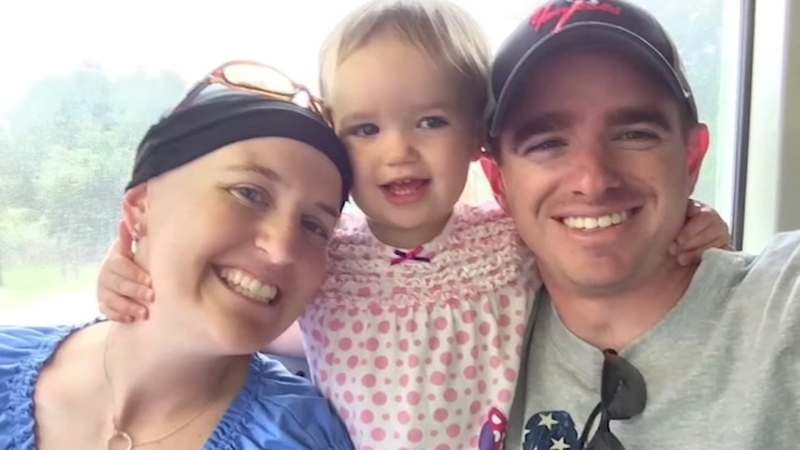 GARNER, N.C. (WTVD) -- Many people diagnosed with lung cancer have never even touched a cigarette.

Gwen Orilio, a high school math teacher from Garner is one of those people, but the wife and young mother is finding hope in a treatment designed specifically for the type of cancer she's fighting.

In 2015, Orilio was 31, in the prime of her life, when she was diagnosed with Stage IV lung cancer.

Having never smoked--or even touched a cigarette--she was shocked when a routine eye exam revealed a tumor on the back of her eye. That led to a scan, during which doctors discovered the tumor on her lung.

"The surgeon came and he told me that it is cancer and I said, 'Alright let's do this. What's our next step?'" Orilio said.

The next step for this young mother was onto the oncology floor at Duke Raleigh for an appointment with Dr. Jennifer Garst, oncologist and director of clinical research.

Cancer is caused by mutations in a patient's DNA, which lead to alterations in genes--basically these mutations cause an error in the code that tells cells how to behave in the body.

Indeed it was, a rare ROS1 gene mutation, discovered with comprehensive biomarker testing, also known as genomic testing. In genomic testing, doctors use the genetics of the cancer to guide the treatment of the patient.

"In younger people or people who've never smoked, I dig very hard to find a mutation because there probably is a mutation that's led to the malignancy," Garst said.

Finding that mutation meant no conventional chemotherapy for Orilio. For the last five years, she's taken a daily pill that attacks the mutation in the cancer, but won't cause major side effects--like hair loss--that typically come with conventional chemo.

Orilio has doctor appointments at Duke every 12 weeks and flies up to Boston in between where she's part of a clinical trial.

But this active mom, wife and dedicated teacher is in remission.

"When I was first diagnosed, I was afraid that I was not gonna see my daughter go to kindergarten and now she's in first grade and she's loving it," Orilio said.

"If you lined Gwen up against the wall and said pick out the person with lung cancer, no one would ever pick her," Garst said. "So yeah, she has a very bright future."

Paige Humble, executive director of the non-profit Lung Cancer Initiative said lung cancer is the leading cause of cancer deaths in the U.S. and North Carolina, with 20-25,000 Americans diagnosed each year, despite never smoking.

"Advancements such as genomic testing have allowed patients who have a mutation that also is associated with a targeted therapy to live longer lives with a better quality of life," Humble said.

If Garst had not recommended genomic testing for Orilio, both are convinced she wouldn't be here today.

"I suspect at some point the tumor would've become resistant to whatever chemotherapy we had and would've spread and taken her life," said Garst.

Still, Garst said other patients like Orilio, are being treated with conventional chemotherapy.

"It has taken a long time for it to be the standard of care for mutational testing to be done on lung cancer patients and you really have to be proactive about it," Garst said. "A lot of times, doctors aren't proactive about it."

Orilio is urging anyone getting that dreaded cancer diagnosis to advocate for yourself, ask questions about genomic testing, and get the answers.