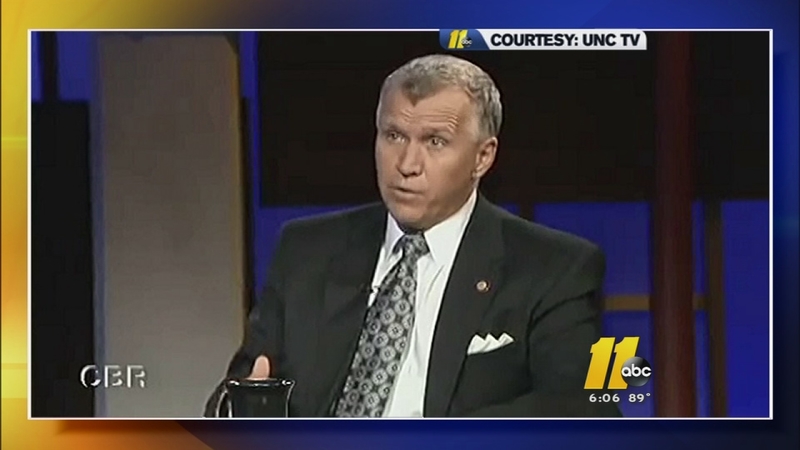 RALEIGH (WTVD) -- North Carolina House Speaker Thom Tillis is under fire for comments he made two years ago that some are calling offensive.

Tillis' comments, made in 2012 on the Carolina Business Review show on public television, responded to a question about the Republican Party's future. The interviewer asked about the shift of Hispanic voters to the Democrats. Tillis' answer referred to Latinos and the black population.

"We need a focus on limited government and free markets, which is something that's appealing to everybody," Tillis said on the show. "That kind of work will position us for those growing sectors. The traditional population of North Carolina and the United States is more or less stable. It's not growing. The African-American population is roughly growing but the Hispanic population and the other immigrant populations are growing in significant numbers. We've got to resonate with those future voters."

"As an elected official, Speaker Tillis sets the wrong example by classifying some North Carolinians as traditional and implying others are not, and he should apologize for this offensive comment immediately," she said in a release.

At a news conference, a small group of a half dozen or so said they were speaking on behalf of their communities. They contended Tillis made the comments on purpose - intentionally drawing the distinction between white North Carolinians and minorities.

They charged he was basically speaking in code to "divide and conquer," a term Tillis himself used in 2011.

"I'm sure he understands what he did was deliberate. He meant to say what he said. It was an opportunity for him to divide and conquer and I stand on that. That's exactly what he wanted to do," said Rev. Earl Johnson of Martin St. Baptist Church.

So why are comments made two years ago resurfacing now? They were republished Tuesday in a report on the Talking Points Memo political website.

Tillis "believes the philosophy of growth and hard work and freedom has appeal to people across North Carolina, whether they are natives of the state or newcomers and regardless of their demographics," Shaw said in an email.

Friday afternoon, Orlando Watson, the Republican National Committee's Communications Director for Black Media, released this statement: "The truth of the matter is Thom Tillis called for expanding the Republican Party's efforts to engage minority voters - something every single elected official in America should be doing. But two years later, Kay Hagan is distorting Tillis' words - the same exact words previously used by the NAACP and former chairman of the Democratic National Committee -- in her desperate attempt to score incredibly cheap political points. The reason is obvious: Kay Hagan cannot defend her liberal record and would rather resort to deplorable attacks to defame her opponent."