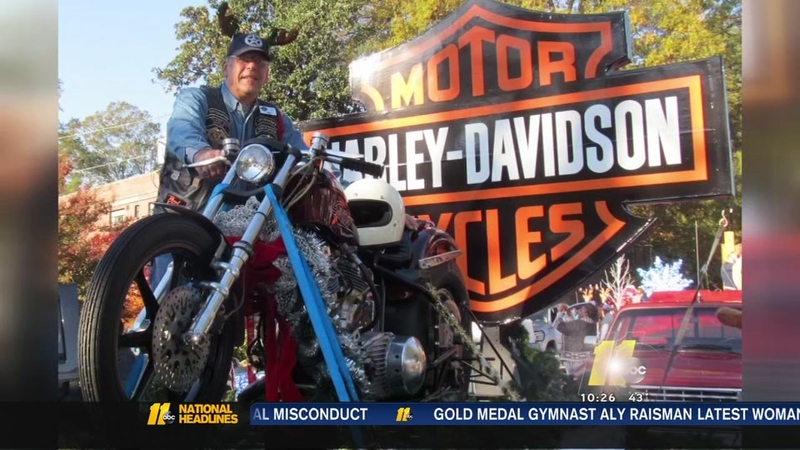 Ray Price Harley Davidson is a staple of the Raleigh Christmas parade.

WAKE COUNTY, NC (WTVD) -- Ray Price Harley Davidson is a staple of the Raleigh Christmas parade, and their float is paying a special tribute this year, using it to celebrate their connection with the community.

"We enjoyed being a part of the parade because it's Raleigh, and were part of the fabric here in downtown Raleigh," Kris Weiss, their marking director, said.

The "Toys-for-Tots" under the tree show just one of the many charities they support.

The sense of community is something Ray Price began at the family-owned business 35 years ago, and it's what they will pay tribute to this year.

"We have the motorcycle on there, and we probably won't have anyone sitting on the motorcycle, since Ray had passed, and so it's kind of a tribute to Ray," Weiss said.

"He was just a good old country boy from Johnson county that made good," Floyd Baker said, Mission pastor at Freedom Biker Church. "But he always remembered where he come from."

Supporting causes like the USO, the former Air Force member had a tradition of giving back, one that lives on through the Harley Owner's Group here.

While the mechanical innovator and "Father of the Funnybike" is well known for his drag racing, winning over 46 national events, it's his charity work that remains his legacy.

"Ray was very compassionate," Baker said. "He was a good steward of the gifts that he had. He utilize what the Lord blessed him with, and he used everything to as close to maximum efficiency as any man I've ever met."
Report a correction or typo
Related topics:
community & eventsmotorcycle accidenteventsraleigh christmas parademotorcycles
Copyright © 2022 WTVD-TV. All Rights Reserved.
TOP STORIES
Trees down, thousands without power after powerful overnight storm
Record-breaking heat today for Triangle
Officials remain optimistic as tourism in Wake County booms
Driver struggles to get permanent tags for truck bought on Vroom
Violent crime in Durham up 8% during first few months of 2022
Funerals begin for victims of Buffalo supermarket shooting
American Airlines flight veers off runway in Charlotte
Show More
Decrease in home sales predicted nationwide but NC housing market hot
NY high court to determine if Bronx Zoo elephant is a person
Juvenile taken into custody in Wake Forest shooting
911 dispatcher who took Buffalo shooting call put on leave
Wake County Sheriff Baker says he'll seek runoff
More TOP STORIES News