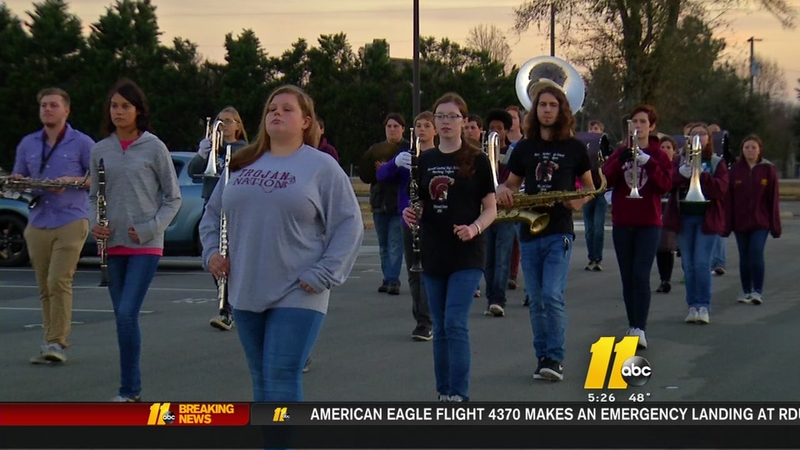 The Harnett Central band prepares for its Disney World performance.

They are set to play the world premiere of a song written to honor a classic Disney composer.

Months after getting the green light from Disney, an opportunity popped up to play the world premiere of the song "Disneyana."

It's written by composer Robbie Sherman - son of famous Disney composer Robert Sherman who wrote songs for "Mary Poppins," "The Jungle Book" and other Disney classics.

The song is a tribute to his late father, and Harnett Central found out about it when a band parent interviewed Robbie Sherman on her Disney themed podcast.

"And [he] said I'd really, really love to hear this song played going down Main Street USA in Magic Kingdom," Spencer Hinson, the school's band director, said of Robbie Sherman on the podcast. "And my band parent said I actually know a band that's going to Disney."

As it would turn out, the parade is scheduled on what would've been the senior Sherman's 91st birthday. His son agreed to let the high schoolers play it.

"This is something that's such a big deal," Hinson said of being able to premiere a song. "It'll probably be the last time it happens in my teaching career and I have 30 more years of teaching."

"I am so excited honestly I'm so hyped," Kitty Scott a student in the band said. "Me and my family, we've seen so many of the classics."

School administrators said they couldn't be prouder of the student's hard work.

The band practiced for more than 90 hours for the performance, and they each practice their individual instruments at home.

"When we come together we're not learning our music, we're learning everybody else's music and how we all fit together in an ensemble," Chloe Bryan, another student, said.

Editor's note: The Walt Disney Company is the parent company of ABC and ABC11.