'My baby is not here anymore:' Harnett County mom pleads for answers after son was struck, killed in hit and run 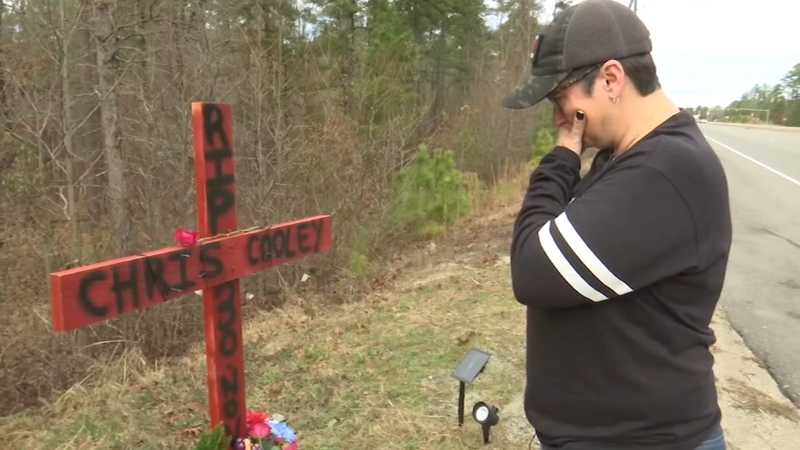 Harnett County mom pleas for answers after son was struck, killed in hit and run

HARNETT COUNTY, N.C. (WTVD) -- Christmas was a tough one for the Murray family as they gathered around the tree with plenty of tears and heartbreak.

Murray's son, Chris Cooley, was struck and killed nearly a week before his 23rd birthday. The driver kept going.

A month later, she reminisced on the memory of Cooley at a roadside memorial that now sits at the site where he was killed on Nov. 30.

The memorial decorated with flowers, crosses and a flag representing his favorite football team. It's a painful reminder of him along with his empty bedroom.

"He was always singing. He used to sing all the time. Now, I haven't even turned on the radio. Scared one of the songs we used to sing will come on," said Murray.

Family, friends and coworkers gathered at Cooley's job to hold a birthday party and benefit for him. His mother determined to never stop looking for the person responsible.

"My baby is not here anymore. It's not fair and it's not right. Take some responsibility for what you've done," Murray plead.

“My baby is not here anymore. Take some responsibility for what you’ve done.”

Shelee Murray’s 22 year old son Chris was struck and killed along NC 87 a week before his birthday. The driver kept going. New at 5:30: her plea to the driver and anyone who may have answers. #abc11 pic.twitter.com/utTnsvQRip

Highway Patrol continues to work the investigation. So far, they've received nearly 20 leads, but nothing has panned out.