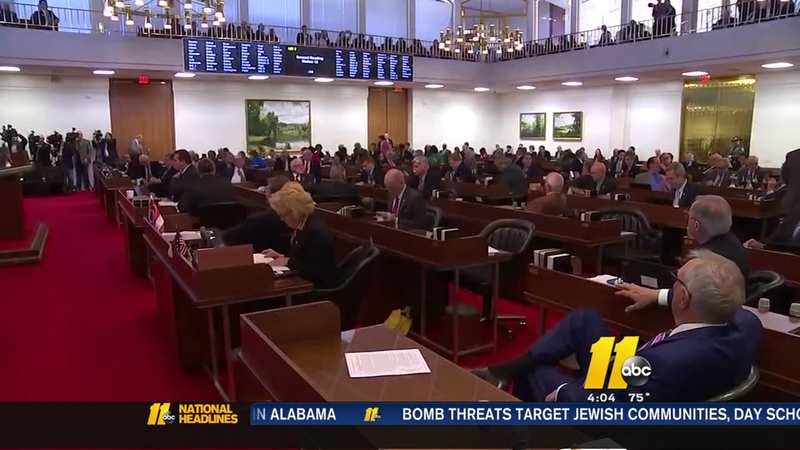 RALEIGH, N.C. (WTVD) -- A new proposal to get rid of North Carolina's HB2 "bathroom bill" is stalled in committee as Republicans and a new Democratic governor disagree about empowering local governments to expand LGBT rights.

Both sides are fighting to get what they want.

HB186 is the latest piece of legislation that would repeal HB2. The bill would restore restrictions on local governments that want to adopt anti-discrimination protections. It would also continue to allow the state to have say over bathroom policies.

Opponents told reporters Tuesday only a complete HB2 repeal will satisfy them.

"There's no more communal place in America than our restrooms and why anybody should face discrimination when they go in one is pretty hard to imagine," said McKissick.

McGrady has vowed to keep HB186 in committee until he's sure he has the votes to get it passed.

"The bill isn't going to move forward unless I get the Democratic votes," he said.

While both sides work to come to a consensus, each knows something needs to be done quickly.

The NCAA is threatening to boycott years' worth of championship games. More than 130 events are at stake.

"If we're going to take the right action, we ought to take it at the right time to minimize the damages that could occur to the state," said McGrady.

The Greater Raleigh Convention and Visitors Bureau, which submitted the sports bids, is not commenting on the HB186

"We are encouraged by the bipartisan efforts underway in the state legislature to find a solution. That being said, we will not endorse any one bill; we simply seek a swift compromise that will allow us to begin to repair the reputation of our region and state and get back to selling and marketing Raleigh as the thriving Southern capital city that it is, one shaped by the passionate minds of its inclusive and welcoming residents," said President and CEO Dennis Edwards. "We don't know how the NCAA or other organizations will view this or any other bills, and will not attempt to speak on their behalf or any other clients/groups that have expressed concern over holding events in Raleigh and Wake County."

The Raleigh Visitors Bureau could learn as early as next week if it's losing games.