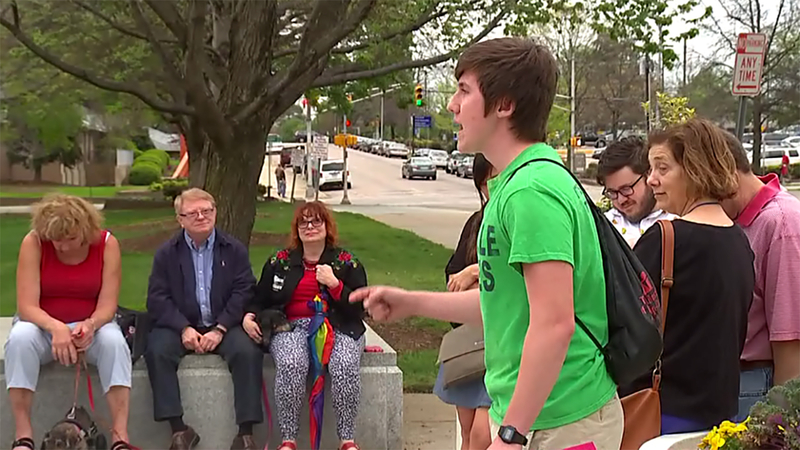 RALEIGH (WTVD) -- Voices for and against a controversial new North Carolina law are growing louder.

A day after supporters of House Bill 2 held a prayer vigil outside the Executive Mansion, another group against the law took their case to the heart of the Capital City.

The transgender community and advocates demonstrated outside of the Legislative Building on Friday. The day marks some significance. April 1 was when Charlotte's ordinance was supposed to take effect allowing transgender people to use the bathroom they wanted.

"The reality is I have been targeted as a transgender individual. All the visibility that has happened because of this bill has made it more dangerous for us, not only to go to the bathroom, but to go shopping at the grocery," said organizer Laura Nazario.

HB2 swiftly moved through the General Assembly. The legislature finalized the bill in a one-day work session and Gov. Pat McCrory signed the law hours later.

McCrory sent out a tweet last week after he signed the bill saying, "(The) ordinance defied common sense, allowing men to use women's bathroom/locker room for instance. That's why I signed a bipartisan bill to stop it."

Since his pen went to paper, some governors in other states have banned travel to North Carolina, and there's a growing list of companies calling for a repeal.

Supporters of HB2 say the businesses are acting like bullies.

"These corporations from out of state want to tell the people of North Carolina what the public policy of our state ought to be and at some point it's going to start hurting them," said North Carolina Values Coalition Executive Director Tami Fitzgerald.

GOOGLE VENTURES SAYS IT WON'T INVEST IN NC OVER HB2

"We're losing business. We're losing money and not only that, we're a national embarrassment. So who's the bully here?" said organizer JoAnne Spataro.

More than a hundred businesses are calling for a repeal, but none have threatened to leave the state so far.