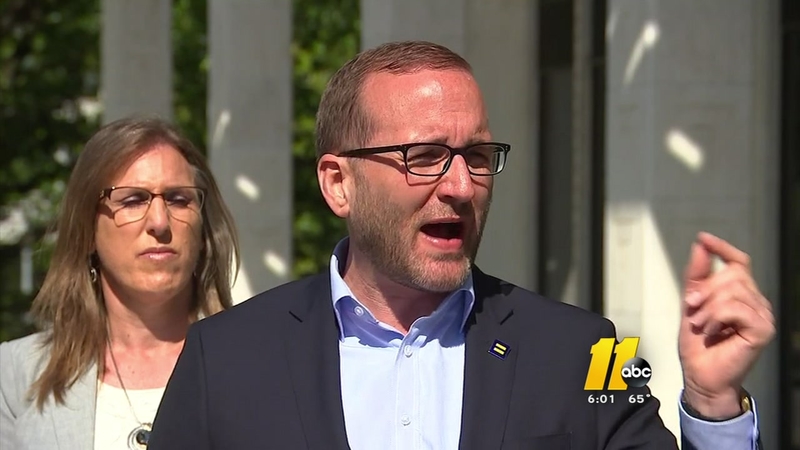 RALEIGH (WTVD) -- Equality North Carolina and the Human Rights Campaign are making a mammoth request as they continue their fight to repeal House Bill 2. The organizations are calling for all documents concerning the bill's passage to be released.

"Make no mistake about it. This is not a piece of legislation about bathrooms," said Human Rights Campaign President Chad Griffin. "What the governor is attempting to do is confuse the public and make everyone think that's the only thing in this legislation. Where in fact it does so many other things."

Opponents of HB2 believe something is suspect, and that there was some sort of plot to ram the legislation through. They filed an "open records request" Thursday so they could have access to those documents.

"I think the governor actually believed this could be done in the dark of night, few would notice and there would be no consequences," Griffin said.

McCrory refused to answer questions about HB2 on Thursday at an event in Rocky Mount. Read more here.

A spokesperson with McCrory's office sent the following statement regarding the Human Rights Campaign:

"The Human Rights Campaign is a shadowy, left-wing group funded by anonymous donors that is recklessly leading the charge to mislead the public and smear North Carolina. Yesterday, this group's hypocrisy reached new levels when it praised the Democratic governor of Louisiana for signing a historic executive order after criticizing Gov. McCrory for signing a nearly identical executive order that expanded protections for state employees."

The bill moved through the General Assembly at lightning speed. It was drafted in a one-day special session and McCrory signed it into law hours later.

Supporters have argued these last few weeks that HB2 protects the public and is a common sense law. Opponents say the law has nothing to do with bathrooms.

NC Values Coalition Executive Director Tami Fitzgerald says there is nothing to hide in the emails. She feels the request is not about transparency, but intimidation.

"The Human Rights Campaign is attempting to bully the Governor, the General Assembly, and us by filing an unusually large and unreasonable public records requests. This is just another tactic in their playbook," Fitzgerald said.

Opponents want the emails released before the General Assembly reconvenes. Lawmakers will return in about a week and half.

They say every day the law is on the books, the state's reputation is being tarnished and economic dollars are being ripped away.

"This is a governor and a state in crisis. It will continue to be so until HB2 is repealed," Griffin said. "The job losses will continue. The concerts will continue to be canceled. The conventions, not only the ones canceled but the ones the state is pitching to come here, will no longer come. Businesses are not going to expanding in the State of North Carolina and I assure you the Executive Order will change none of that."