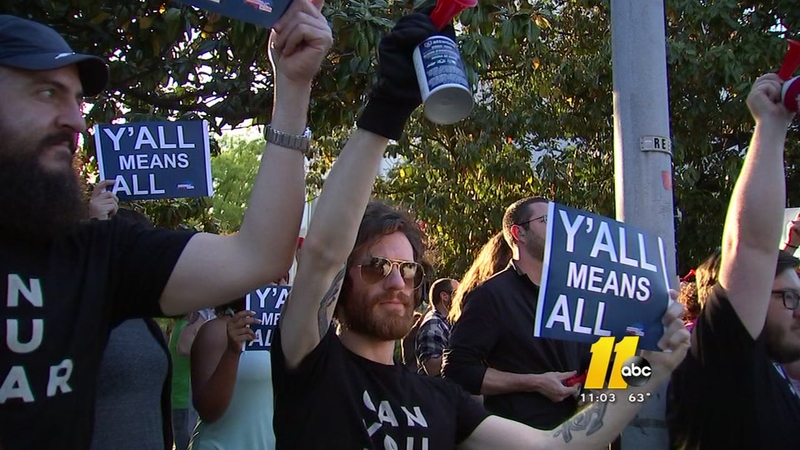 "And not doing it by holding typical signs, but to sort of change the conversation and to have a message that is as ridiculous as what we think is coming out of the governor's mansion and the state legislature," said protest organizer Grayson Haver Currin, referring to what the group believes is the bigotry behind HB2.

AHEAD OF RALEIGH PROTEST, BERGER SAYS NO REPEAL OF HB2

Demonstrators used the same tactic outside the Mansion earlier this month.

But neither side is backing down. The state's top Republican in the senate, Phil Berger, staged a news conference defending the law against claims it discriminates against transgender citizens.

"There are several documented instances where men dressed up like women or used policies similar to Charlotte bathroom ordinance, to gain access to women's bathrooms and changing rooms and spy on women and little girls," Berger said.

The protesters scoffed at the allegations.

"You know what, I'm so sick of people speaking with authority that have nothing backing it up," said protester Leslie Coburn.

"How many cases do you know of about transgender people who have hurt, injured or even talked to ugly to children in bathrooms, there's none," said Gloria Faley.

Meanwhile, the conservative coalition backing HB2, called Keep NC Safe, emailed every state lawmaker a pledge Tuesday night asking for a promise not to change or repeal the law.

But hours later, the group rescinded the pledge. Lawmakers were suddenly told to ignore it.

Leaders at Keep NC Safe would only confirm to us that they had withdrawn the pledge, but wouldn't comment on why.

The pledge would've put Republican lawmakers at odds with McCrory, who has called for some changes to HB2 when the legislature reconvenes next week.