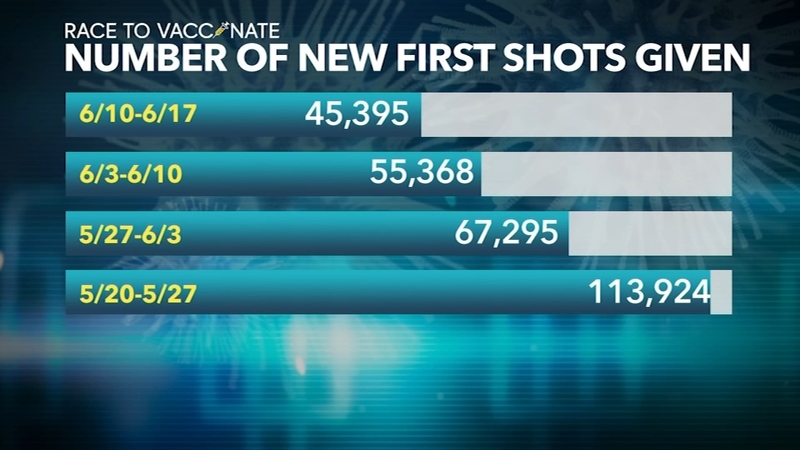 Around 10,000 fewer people received their first dose of a COVID-19 vaccine during the week after Cooper's June 10 announcement than the previous week, according to an analysis of NCDHHS data.

The number of first doses has been declining across the state since the middle of May.

State health officials had hoped by offering a chance at $1 million and scholarships, residents still on the fence might roll up their sleeves.

"We believe this program will help get more North Carolinians vaccinated, making our state safer for everyone," Cooper said during the June 10 press conference.

Multiple other states across the U.S. have offered incentives including, cash prizes, scholarships, attraction passes, tickets for state attractions, even trucks.

These announcements appeared to have a positive impact in Ohio, West Virginia, New York and Delaware, based on ABC11's analysis of Centers for Disease Control and Prevention data on first doses administered in the week following each state's announcement.

Other states like California and Minnesota did not see an immediate increase in people seeking a COVID-19 vaccine for the first time.

NCDHHS data did show the total number of vaccines distributed statewide increased during the week of June 7. This is the first time the number of doses has increased since early April.

The ABC11 I-Team uncovered much of the increase was due to a jump in second doses, while the number of first doses continued to decline.

County data from last week also showing an uptick in residents getting partially vaccinated. Even some of the counties reporting the lowest vaccination rates, like Robeson, Cumberland and Hoke County reported a slight increase from June 7- June 14.

Cooper's incentives were not announced until Thursday of last week, so it's hard to know if the announcement was a factor in the uptick.

Cooper said on Friday he hopes the state's first lottery drawing on June 23 will motivate more people to get vaccinated.

A spokesperson for NCDHHS said officials continue to monitor the impact of the announcement and expect to get a better picture next week following the first drawing.