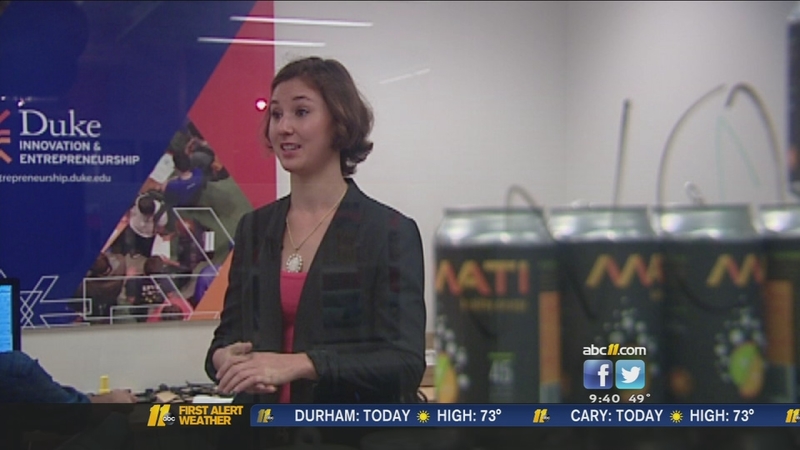 DURHAM (WTVD) -- A new energy drink is hitting the shelves of dozens of Whole Foods grocery stores across the southeast, and it all started in a dorm room at Duke University.

At 24, Tatiana Birgisson just rolled out her Mati Energy Drink into dozens of stores.

"As of October, we'll be across the South with Whole Foods," she explained.

In fact, Whole Foods in the Triangle and local startups is where Birgisson first began selling her drink, and grew it from there.

"You keep pushing and trying one step at a time," she said. "Take it day by day-do as many sales as you can."

Before there were sales, it all started back in college where Birgisson was studying Engineering at Duke.

"I was struggling with depression as a student at Duke University," she said. "I was sleeping about 20 hours a day and I was trying to do something so I could stay awake more. So, I started brewing teas."

The teas caught on with classmates and when Birgisson won a Duke grant to spend a summer working on a startup, her friends suggested her tea as a business.

"We don't use a tea anymore, we now use an herb," Birgisson explained. "It's the second most caffeinated plant behind coffee called guayusa. And, we add juices so it's just an herb and juice combination. It winds up having more caffeine than a Red Bull and it is completely natural with tons of potassium and antioxidants."

From here, Birgisson said she has big dreams of selling her Mati Energy Drink internationally.

"My ultimate goal is to have MATI sitting next to Red Bull and Monster and every shelf in the world," she said.

These days, she is busy growing her business while encouraging other female entrepreneurs.

Birgisson cites her big break across the Southeast as one fearless moment. After spending months trying to get a meeting with a Whole Foods executive, Birgisson said she finally hopped in her car and drove to his office hoping for a face to face meeting.

"Six months of emailing didn't get me anywhere," she said. "So, I drove down to Atlanta and I sat in front of the guy's office for 8 hours before he finally had 10 minutes to meet with me."

"A lot of women are afraid of the risk, but you just have to have moments of fearlessness," Birgisson said. "And, those are the moments that will get you through."