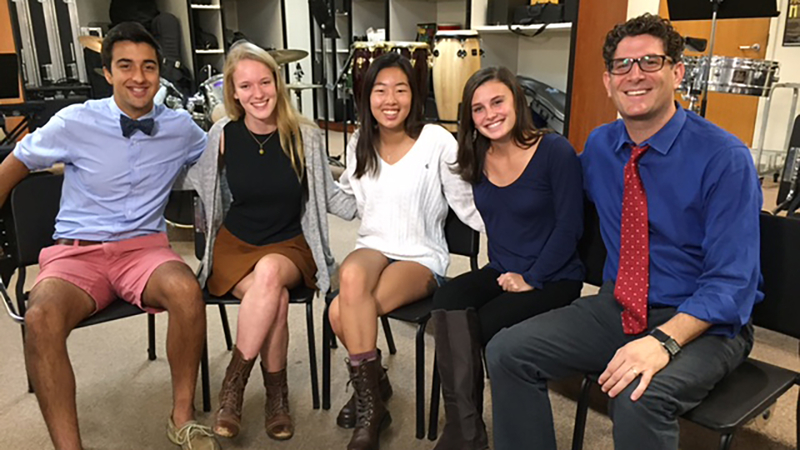 DURHAM (WTVD) -- The idea to make a music video actually began as a competition piece for Durham Academy's a capella group, XIV Hours.

"There was this really cool song we really wanted to do, the beat was cool and the melodies were cool, but when we listened to it we realized that the lyrics were something that we didn't .. it conveyed a message that we didn't think we should be supporting as a high school a cappella group," explains Veronica Kim.


So, the students got together with their director and started brainstorming a way to highlight the issues they found in mainstream music, ranging from hyper-sexualized lyrics to unrealistic expectations of what healthy relationships were. They put together a mash-up of 18 different songs, separated into a 3-act performance. They first debuted their project at their first ever national competition in Tampa.

They didn't win, but they did get kudos from some of the judges.

"One judge really touched us. He came up to us after we performed and he said how much it meant to him that kids were doing this," shared Thea Lance.

And then, as they were flying back to Durham, an idea was hatched.

"Two of our seniors last year came to the back of the plane, and were like, 'guys, we're doing a music video!' And we were like, 'ok, awesome, we can get behind that for sure.' So that was the start of 6 months of work and recording and filming and editing," explains Kiran Nagar.

It was a process that took them into the summer months, something their director, Michael Myer, says is a testament to how passionate they were about this project.

"The last day we filmed on the rooftop was the last day for one, if not more of the kids, to leave for college. And in a group where 11 of them were graduating and going to college, obviously they felt something about this," Myer adds.

Since they made their music video and debuted it at their own school, it's been shared thousands of times. It was even featured by MTV, Huffington Post, and Seventeen Magazine. It's also been promoted by Rape Crisis Centers and Domestic Abuse Prevention Outreach Centers.

"I was amazed at the reaction. I wasn't expecting, necessarily, such a supportive reaction from the communtity. A lot of people came up to me afterward and said it really touched them and affected them and opened their eyes to these issues that they didn't necessarily know were there," shares Mackenzie Simpson.

As for the exact messages the group hoped to share? The students break down the acts as follows:

"Act One asks: what if people actually said in real life what 'club anthemsc discuss? The overtly sexual nature of some of those lyrics, when sung by teens, can be uncomfortable to hear or watch.

Act Two follows a couple whose relationship is intentionally vague, and is complicated by the fact that they are dealing with weighty decisions at a young age and may not be communicating with each other clearly.

Act Three shows the fallout from hookup culture: broken hearts and loneliness. In a breakthrough moment, our characters realize that open communication and holding each other up, rather than tearing each other down, is at least a start toward navigating relationships safely."