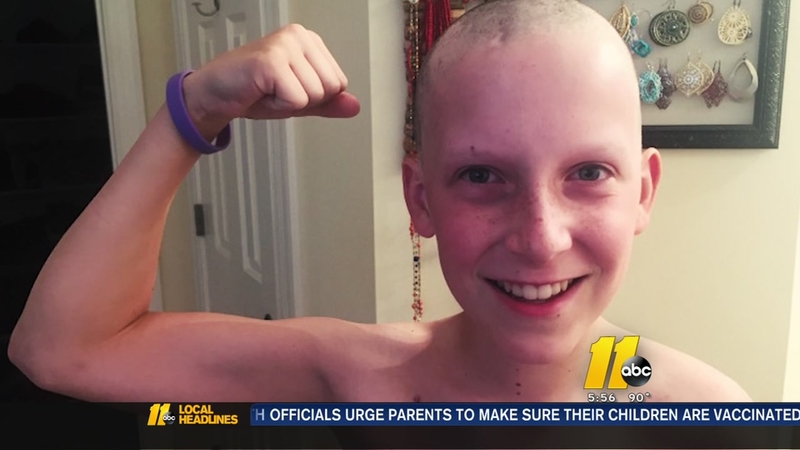 A pair of doctors at UNC spent the last year creating a fertility preservation protocol for kids with a cancer diagnosis.

No kid at 13 is thinking "I want kids right now," at least Jackson Donahoe wasn't. But that was the topic of conversation for the young teen and his parents after the now-vibrant teen was told he had cancer.

"My heart sank. Everything sank in my body," Jackson recalled when learning of his diagnosis.

His mom and dad, Sommer and Jeff, are in the room. Sommer said that Jackson has always been great with kids.

"Jeff and I just looked at each other and said 'What about babies and protecting Jackson down the line?'" she said.

The two knew that treatment could mean the loss of fertility for their son. It was a gamble, but the couple, along with Jackson, decided to have Jackson's specimen preserved.

Since then, Dr. Matt Coward and Dr. Sherry Ross at UNC have collaborated and are the co-directors of the UNC Fertility Preservation Program.

The two have been working together to create a protocol that will streamline all the information parents will need when it comes to fertility preservation among adolescent cancer patients. Typically, parents are flooded with information, and treatment starts quickly following a diagnosis.

"Families are very often in a very overwhelming position. They've just received news that their child has cancer. Often, getting treated becomes the most important thing and the infertility aspect gets lost," said Dr. Ross. Dr. Coward - noting the regrets of families who opt to not preserve fertility.

Dr. Coward also says that among cancer patients, around 75 percent will not lose their fertility. Jackson won't know until he becomes an adult.

Right now, fertility treatments and preservation is not covered under any type of insurance in North Carolina, which means that the Donahoes and families like theirs are paying for treatment and storage out of pocket. But the family says that they don't think twice about their decision.

"I don't want to tell Jackson's wife later that I wish we would have done it," added Sommer.
Report a correction or typo
Related topics:
health & fitnessuncfamilyfertility
Copyright © 2021 WTVD-TV. All Rights Reserved.
TOP STORIES
CDC reverses course on indoor masks in some parts of US
800K COVID-19 vaccine doses in NC could expire by end of August
Why this Haitian restaurant relocated from Brooklyn to Edgecombe Co.
LATEST: Cooper to 'review changes to CDC guidance'
As COVID-19 cases surge, nervous parents prepare for school year
495 new hepatitis A cases reported in NC this year
Show More
4-year-old dies after report of drowning in Harnett County
Mother, boyfriend charged after 5-year-old's death in Aberdeen
Latinos leading the way in new home ownership in US & in central NC
Black Lives Matter billboard set to go up in Elizabeth City
70-75% of Black women impacted by uterine fibroids
More TOP STORIES News