WTVD
By Andrea Blanford
RALEIGH (WTVD) -- Flu season is well underway across the Triangle and it's shaping up to be a bad year for the virus.

Soboeiro said the flu typically hits hardest in February and March, but already in December, we've seen 8 flu-related deaths in our state and a spike in ER visits.

He says it's largely guess work that goes into creating the flu vaccine. And this year the CDC missed the strain that's now taking a toll.

"That doesn't mean the vaccine's not effective though," said Soboeiro. "It is effective. It's effective at preventing some cases and it's effective in making the cases that we see less serious."

Many fighting the flu are turning to prescription Tamiflu for relief, causing a shortage at many pharmacies.

Raleigh's Hayes Barton Pharmacy still has plenty in stock. Brent Talley, pharmacy manager, says their wholesaler is sending the store daily allotments. But doctors warn Tamiflu is not for every patient sick with the flu.

"Somebody who has cardiovascular disease, or pulmonary disease, emphysema, asthma, those are patients you want to treat with Tamiflu because you're hoping that Tamiflu can prevent that really serious case of the flu. That overwhelming case of the flu," Soboeiro said.

As in years past, many local hospitals are limiting visitation by children -- or banning them outright -- as they try to keep vulnerable patients from catching the virus.

Officials say there are preventative measures that everyone can take to protect against the spread of flu and other viruses -- staying home until you are fever free for at least 24 hours, vigorously wash hands frequently, and cover coughs and sneezes with a tissue and then discard it.

Even though it's not as effective this year, health officials still encourage residents to get the flu vaccination. The CDC recommends that everyone six months and older receive a flu vaccine, available as a nasal spray or in shot form. 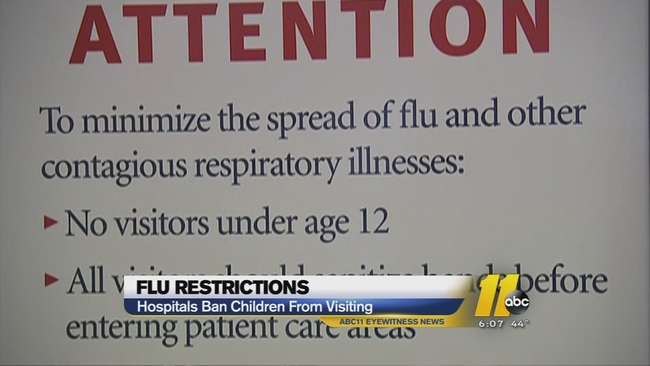